Social Injustice Happening to One - Happens to All


On Monday night August 20, students at the University of North Carolina at Chapel Hill toppled "Silent Sam," the statue of a Confederate soldier that has stood on the campus for over a century.

By early Tuesday morning, Chancellor Carol L. Folt, while acknowledging that the statue "was a source of frustration for many people," had publicly rebuked the students involved, deeming their activism an act of vandalism that was both "unlawful and dangerous." President Margaret Spellings and Board of Governors chairman Harry Smith went further, saying in a statement that "mob rule and intentional destruction of property will not be tolerated." (CNN)

Today's subject is close to my heart and one you may not like. I was born and raised in the South. To be more exact, Virginia. The south has a rich history and my beloved Virginia was at the center of much of America’s early development. The first permanent English settlement occurred in Jamestown VA, in 1607. This settlement based on commercialism thrived and grew. America’s first planned community soon followed in Williamsburg and it became an education, commerce and governmental city. Plantations grew up along the adjacent James River and landowners through hard work, became wealthy. The American entrepreneurial system was established.

With the abundance of land, it was impossible for one man or family to plant and harvest it all. Labor was needed and the plantation system was established.

This system fostered one of America’s greatest tragedies – slavery. According to the 1850 census, there were 3.2 million African American slaves in the U.S. population. It is ironic that the United States of America, “a new nation, conceived in liberty and dedicated to the proposition that all men are created equal,” began as a slave society. 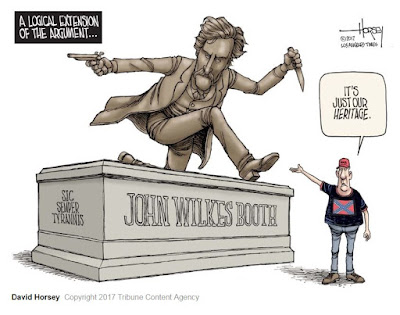 My proud southern history teaches taught me that the ensuing Civil War of 1861-1865 was about “States' Rights”. What they failed to add to that noble cause, it was actually about “The states' right to maintain the slave economy”.

Fact, the Civil War was fought as a war to defend, maintain, and extend slavery.  Slave states needed to take drastic action before more non-slave states joined the union and slavery was outlawed by a strong central government.

General John Kelly, President Trump's former Chief of Staff, was wrong. The Civil War was not about a lack of comprise. Several compromises had already been made. One of which allowed the southern states to count black slaves as only 3/5 a person for federal representation. Let that sink in - not a whole person.

How do you compromise on the subject of slavery?  So, a little bit of slavery is OK? A five day work week and a vacation - however, you can't leave the plantation and we reserve the right to sell you.

Even after losing the civil war, the southern legacy was to keep a perceived underclass in economic inequality as a subservient worker.

That is why the current debate on “Southern Heritage” is ludicrous. Much of this heritage goes back to keeping African Americans in their place. In the early 1900’s the south enacted “Jim Crow Laws” to mandate the color-line. At the same time confederate memorials were placed to solidify the myth that the Civil War was a righteous cause.

Statutes to Civil war heroes were erected to enshrine the false pretense of the war and to remind an emerging community of African Americans, post slavery, be disenfranchised, be segregated. Turning a war criminal into a benevolent fatherly hero, dangerously blurs the question of responsibility for the civil war and its justification.

These monuments were put up as explicit symbols of white supremacy honoring war heroes that fought to maintain an indefensible wrong; the pre-civil war statuesque. Remembering the Civil War as an antebellum “Gone With The Wind” time where slavery was a benevolent institution, is a cruel affront. The monuments were set up as an expression of a wrong intent and a memorial to a wrong cause.

Put these memorials in museums where they will be understood for what they are; symbols of a lost and wrong cause. It is time to take down these memorials to an American tragedy.

"We're standing for all people and all races. If social injustice is happening to one group of people, then it's happening to all."
Al Alston 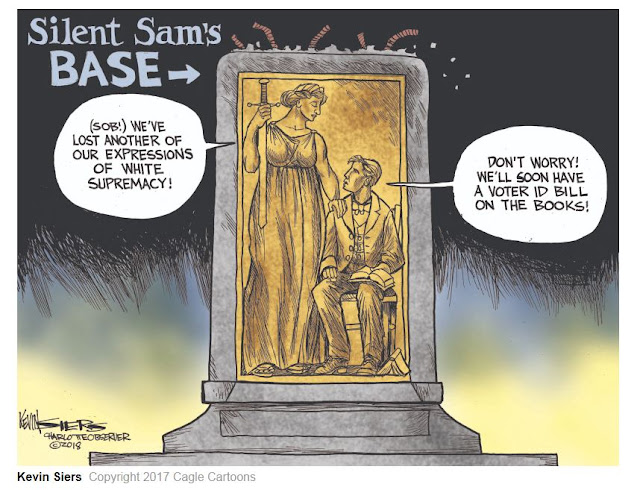