What is happening to America?  Actions are being taken by executive order that make me ashamed.


I feel the need to confess to the fact that my family too came to this land as an unauthorized immigrant. My family neither had the permission to enter, nor did it have proper authorization. My descendant, Mr. Thomas Lygon (Ligon) came in 1640's to the English/Virginia settlement known as Jamestown. My mother was a Ligon (Lygon).

In 2015 then President Obama declared this:


Our country is strong because of generation after generation of immigrants who embraced the ideals of America, and then fought for those ideals, and fought in wars to defend our country, and built companies that employed people, and helped to build the railroads, and the highways, and all the things that we take for granted in this country. Those were built by immigrants. We’re all immigrants. That’s who we are. Unless you’re one of the first Americans — Native Americans, and so we have to recognize that.


Tyranny is defined as “cruel and oppressive government or rule(s)”. We are quickly venturing down that path. Trump is attempting to get different opposition groups to cower before him. He in effect is telling the LGBTQ community, legal immigrants, and DREAMers to keep their heads down and their feet moving. He’s saying, “Don’t protest my government, because I can make things worse for you. Quickly.”

This is not leadership.  This is bullying.  Recognize it for what it is!

Trump is a racist and has on his staff a man who has been known to be racist. That is go-ahead for the other bigots to come out, which we saw during the campaign. Trump has a majority in both the Senate and House and will soon likely have a Supreme Court majority to his liking. Together they have the chance to bend history to their liking.

Just because Trump says "Believe me!" - that does not make it true. The press is the last vestige of a reasonable check and balance.  There has never been a more important time to stay informed.  Agree or disagree - listen and act as necessary to oppose tyranny. 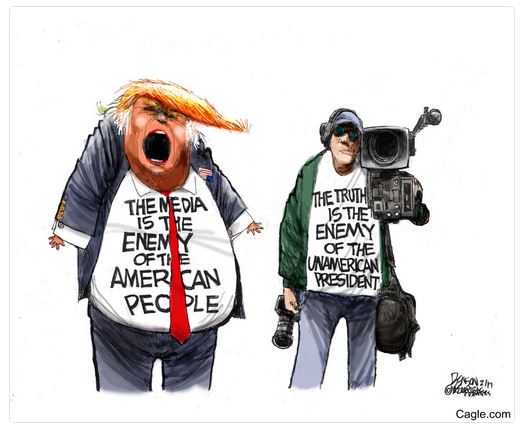 I hope America soon comes to it senses and we return to being a nation we can all be proud.  Don't be bullied - Stand tall - Your voice matters.