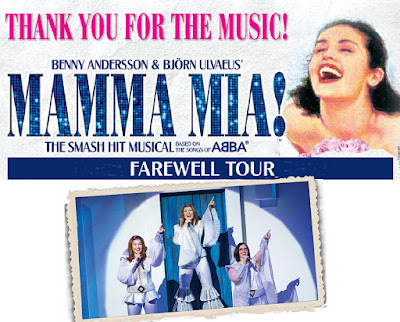 This is a continuation of Wednesday's Post.  My special day continued in Montreal and after leaving the Chagall “Couleur et Musique”, I took the metro subway "Société de transport de Montréal" back to the Place des Arts theater center.

My hotel, The Hyatt Regency, is part of the Complexe Desjardins which is listed as Montreal's premier commercial office building and retail shopping mall complex.  Through a walkway under the street is the Place Des Arts theaters, Museums and restaurants. An entertainment city within itself.

As I exited the metro station and entered the Place Des Arts, I saw in the main theater, "Mamma Mia", the play, was just about about to start.  A precious few good seats were still available for the afternoon matinee.  I love the music, I love the play, I had the time – so why not? A mad dash to our box seats, near the front.

"Mamma Mia" is the jukebox musical adapted from Abba's songs. The Swedish pop group formed in Stockholm by Agnetha Fältskog, Björn Ulvaeus, Benny Andersson, and Anni-Frid Lyngstad became one of the most commercially successful acts in the history of popular music. The play showcases their songs beautifully.  (source: Wikipedia)

I had seen the play on Broadway at the Shubert Theater not long after it's NY opening in 2001 and had seen it again at the Broward Performing Art Center in 2010. Before it's closed in NY in 2015 it had played 5,773 performances on Broadway; A 14 year run. It is always a treat and utilizes Abbas's music to the full. The ending number is a min-concert within a play and the cast seems to be is having a much fun as the audience.  Everyone on their feet.

If this is the "Farewell Tour", I am happy I saw it again.  But - Hopefully not for the last time. 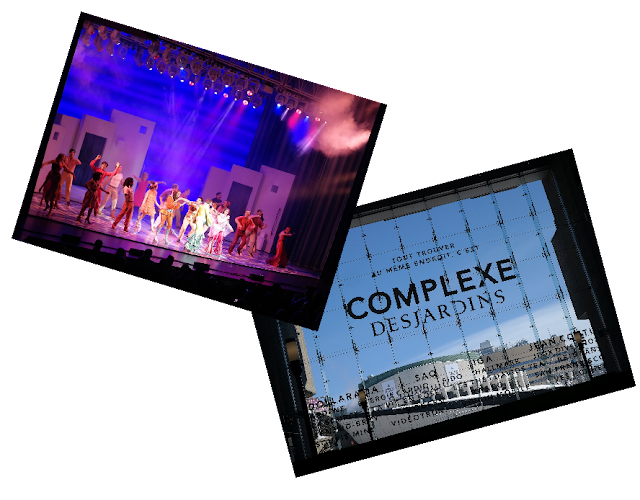 The Closing Song - Mamma Mia     and       View from the Complexe Desjardins