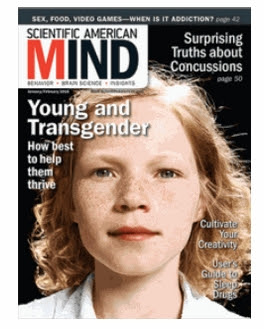 You can click on the above link to read the fascinating article written by Francine Russo.  There are several well written case studies and a discussion on each.  I  am not sure that I agree 100% but it is better for all of us that an open debate is taking place than to just ignore the kids and the important issues.  Had we been born in this generation I am sure our lives would be different today.

Bending Gender - Studies suggest that 0.3 percent of people in the U.S. feel strongly that their biological sex does not correspond to their gender identity. Researchers have developed a multi part transition process for young trans people that begins with careful screening, then blockers at the onset of puberty and later cross-sex hormones to allow them to undergo puberty in their affirmed gender, followed by surgery. Some parents and clinicians are pushing back against the existing guidelines, seeking a more case-by-case approach.

Some children insist, from the moment they can speak, that they are not the gender indicated by their biological sex. So where does this knowledge reside? And is it possible to discern a genetic or anatomical basis for transgender identity? Exploration of these questions is relatively new, but there is a bit of evidence for a genetic basis. Identical twins are somewhat more likely than fraternal twins to both be trans. Francine Russo