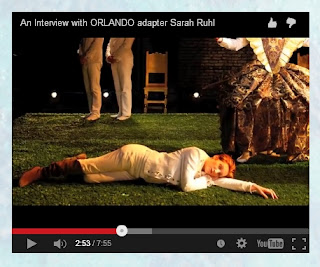 Video on the play "Orlando"


Several weeks ago in Portland OR, I saw the play "Orlando" at the Profile Theater.  This is a theater production adapted from the original by Virginia Woolf.  A fascinating story that is so relevant to us.   The New York Times in a review describes the play this way:

We’ve all had a strange night’s sleep now and then. But it would be hard to top the transformation that overtakes the slumbering title character of Virginia Woolf’s novel “Orlando” after an evening of heady debauchery in 17th-century Constantinople. As admirers of the book will recall, the young English nobleman goes to bed one night a duke and wakes up a duchess.


She emerges, after Orlando’s strange slumber of several days, like a goddess floating on an Empyrean cloud, absolutely unclothed and indisputably female. “Orlando had become a woman,” Woolf writes. “There is no denying it.” No indeed. 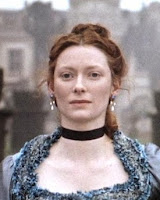 Orlando: A Biography is a novel by Virginia Woolf, first published on 11 October 1928. A high-spirited romp inspired by the tumultuous family history of Woolf's close friend, the aristocratic poet and novelist Vita Sackville-West, it is arguably one of Woolf's most popular and accessible novels: a history of English literature in satiric form. The book describes the adventures of a poet who changes sex from man to woman and lives for centuries, meeting the key figures of English literary history. Considered a feminist classic, the book has been written about extensively by scholars of women's writing and gender and transgender studies.

I first became acquainted the Orlando for a 1992 movie that stared Tilda Swinton. (photo above)   Shortly thereafter I read Virginia Woolf's 1928 book and was hooked.  If you have not read the book, seen the movie or get a chance to see the theater adaptation - do. 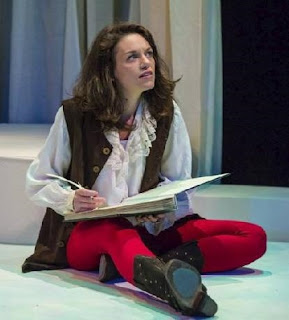 Scene from Portland production of Orlando