Feminine Differential - Is My Slip Showing?

There are few garments that cry femininity better than the slip.  It is an in-between look that is not exactly an "unmentionable" under garment and something you would not wear in public.

Whenever I would sneak into her closet it was always my try-on favorite.

Getting back to Liz: I think she probably did more for slip sales than any lingerie advertising agency could dream of. Can you imagine the slip sales after her appearance in a lacy full slip in her 1958 movie, "Cat on a Hot Tin Roof". Overnight slips became dramatic, provocative and sexy. That was not the last time either.

Then she did it again in 1960> The movie *BUtterfield 8 and more seductive slips. Liz again showed us lingerie can be fabulous and not just meant for under a dress.  Thank you Liz.

Amazon describes "The Skip" this way:

Here is great article from USA Today by Maria Puente

July 7, 2017
In the 1940s through the 1960s, you could look in any woman's underwear drawer and find one: A slip. Silky, lacy, sexy. Think Elizabeth Taylor in her Oscar-winning role in Butterfield 8.
And there was Rita Hayworth's picture in a lacy slip from 1941, which helped make her a top pin-up girl for GIs during World War II.
Not familiar with those iconic images? Well, therein lies the problem: Who wears slips nowadays? And, more to the point, who buys them?
The global lingerie industry, which includes bras and panties and a dozen other product categories, totals more than $28 billion annually and is growing. But no one seems to have any data on sales of slips, or if they do, they don't want to talk about it. Victoria's Secret, the leading retailer of underwear, with as much as 60% of the U.S. market, declined to discuss their sales data with USA TODAY.
But it seems clear from the testimony of celebrity stylists, fashion historians, manufacturers and retailers that sales of slips for their original purpose have been slipping, and for some time.
"Slips are not really worn anymore," says Cheryl Paradis , account executive for Mapale, a Miami-based manufacturer of lingerie. "It probably started in the late '70s and early '80s when people stopped layering and became a little more comfortable showing skin. Back then if you were wearing a skirt or a dress, you were wearing a slip. Nowadays, it's not really done anymore. "
So what happened? Fashion historian Colleen Hill, curator of costume and accessories at the Fashion Institute of Technology in New York, says many women stopped wearing full slips during the 1960s and into the 1970s as hems hiked up and half-slips, camisoles and teddies became easier and more wearable choices.
"The elimination of the slip also coincided with the greater acceptance of the bare or 'natural' body," Hill says. "Sheer, unstructured bras and slips were often all that was worn under clothing. The slip made somewhat of a comeback during the 1980s, but it has not been considered an essential undergarment for decades." 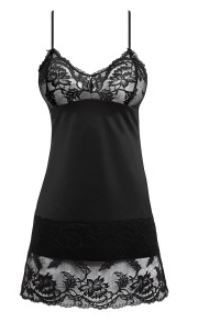 "I feel like I had to re-educate a whole generation on how to wear a slip," O'Brien says. "I find that women are still wearing slips because everything drapes better with a slip, it helps with opacity when you’re dressing for the office and it’s comfortable."
Her campaign has been a success, she says, demonstrated during New York Fashion Week when she spotted a woman at a restaurant wearing a black Commando slip as a dress.
"There are no rules in fashion anymore," she says. "There was a time when undergarments were very private and nobody spoke about what they were wearing beneath their clothes, but they are now visibly wearing those pieces on the outside."
________________________