In the nonpartisan election, Ketchum won 39.3 percent of the vote, beating Peggy Niebergall by just 15 votes, according to WTOV-TV. She will assume office July 1.

“Running for office was never in the plan for me,” Ketchum, 26, said in an interview with NBC News. “I didn’t know what that would look like or how I would fit into that world.”

After graduating from Wheeling Jesuit University in 2019, Ketchum threw herself into community organizing, serving as the director of a mental health center in Wheeling.

“The more local I kept my mindset, the more passionate I became about representing my community on some of the issues I think are most important,” she said, explaining that poverty, homelessness and substance abuse are recurring issues for the West Virginia panhandle area.

Wheeling, in West Virginia’s northern panhandle, is sandwiched between Ohio and Pennsylvania, along the banks of the Ohio River. Pittsburgh is an hour’s drive to the northeast.

“It’s personal to me,” Ketchum said. She was homeless after her family’s home burned down as a child, and she said that family members have also been affected by the opioid epidemic that has killed hundreds of West Virginians annually for over a decade.

“I absolutely am focused on that, and helping to bridge the gap between compassionate law enforcement and rehabilitation,” she added.

Ketchum said her status as a transgender woman was not an issue in the election, describing 98 percent of her interactions with voters as positive.

“The moniker is that we are the ‘friendly city,’ and it’s something I think we exemplify every single day,” she said, describing Wheeling as “progressive” compared to other areas in the state. 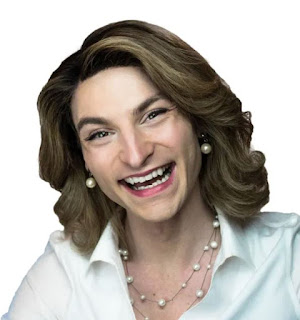 And as for that less-than-friendly 2 percent? “You don’t get this far by being sensitive to people's fever dreams, so I’ve definitely built up the ability not to take it personally," Ketchum said.

Reflecting on her historic victory, Ketchum said she was inspired by LGBTQ women like Danica Roem, a member of Virginia's House of Delegates, and U.S. Sens. Tammy Baldwin of Wisconsin and Kyrsten Sinema of Arizona, all Democrats.

“It’s still strange that it makes history, but I'm grateful to be a part of that,” Ketchum said.

Annise Parker, president and CEO of the Victory Fund, a PAC that supports LGBTQ candidates, said Ketchum “has shattered a lavender ceiling in West Virginia and will join the growing number of out trans elected officials serving nationwide.”

“Trans people are severely underrepresented in elected office — with just 26 out trans officials anywhere in the country — so Rosemary’s victory will resonate well beyond her state,” Parker added in a statement. “We know Rosemary’s race will inspire other trans people from conservative states to consider a run for office in their communities — and then those candidates will inspire others as well. That virtuous cycle is the key to building trans acceptance and political power long-term.”