I attended last Friday a cabaret performances of "An Evening with Charles Busch - My Kind of 60's" at the elegant and intimate Palm Beach DramaWorks theater.  I am sure that most of you are familiar with Charles but just in case;


Charles Busch is an American actor, screenwriter, playwright and female impersonator, known for his appearances on stage in his own camp style plays and in film and television. He wrote and starred in his early plays Off-off-Broadway beginning in 1978, generally in drag roles, and also acted in the works of other playwrights. He also wrote for television and began to act in films and on television in the late 1990s. His best known play is The Tale of the Allergist's Wife (2000), which ran for 777 performances on Broadway, Others are , Vampire Lesbians of Sodom, Psycho Beach Party, The Divine Sister, The Lady in Question and Charles Busch's Cleopatra. (source Wikipedia) 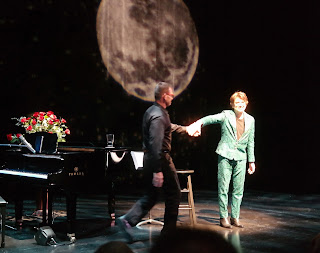 His "My Kinda 60s  included  music he remembers from his childhood, growing up in the 1960s. "They’re all songs from pop, Broadway, film, just an incredible and eclectic group of songs.  Included were two Broadway songs, but not ones that will be familiar to a broad audience. He said they are songs “from the time when the Broadway theater was changing. I do early Sondheim,  a very haunting song from Cabaret, ‘What Would You Do?'” which he described as very appropriate for today.

"My Kinda 60’s" weaves tales of his Manhattan childhood and adolescence raised by his “indomitable Aunt Lillian” during that tumultuous decade, with a musical narrative that mixes the period pop of Burt Bacharach, Jimmy Webb, the Beatles, Henry Mancini, and Bob Dylan, with show music by Stephen Sondheim, Kander and Ebb, and others.  He dedicated the song "Those Were The Days" to his Aunt Lillian.  A beautiful tribute.

After the show there was a champagne reception where I got to speak with Charles and had the above photo taken.  I know Bill and Sue Ellen, the owners of DramaWorks and I thank you for hosting this sold out event for PBC-HRC. What a marvelous event. An enjoyable evening - Life is good.