Political Soap Opera - Or Not?

OK, I promised to "Dial it Back" on the political commentary. So I am now writing political fiction/drama with a slight touch of madness. George Orwell, I am not, and hope that I am not seeing anything other than a good political soap opera, taken to an absurd conclusion. I am sure that there are political students that read my blog and I welcome your comments. Let's call this fiction and hope it does not happen!

Trump's reality as it exists now: 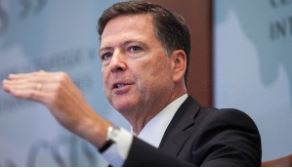 Trump cannot tolerate defeat or any norm that does not fit with his inflated ego;  e.g. not winning the popular vote in 2016, the Washington mall inauguration crowd, less than full pledged loyalty (Comey and Sessions) and the 2018 mid-term loss of the majority in the House of Representatives.

Unwilling to accept reality, he feels that voter fraud cost him the popular vote and mid-terms; so voter fraud must be rampant. Plus any news that does not fit into his narrative is "Fake News".

Mueller's final report will likely provide a roadmap for the House of Representatives to impeach Trump. Trump is well aware of this, even though he calls the investigation a "Witch Hunt". If he is successful in firing and stopping Mueller (likely), then The New New York State Attorney General will continue to target Trump as an unnamed co-conspirator in numerous pending cases with indictments possible after Trump leaves office. He cannot pardon himself in state matters thus staying in office is his best/only option.

The political reality is that after the US House impeachment, Trump will not be convicted or removed from office by the Senate. The Republican Senate simply does not have the fortitude to act no-matter the charges. Trump will run for re-election in 2020.

Trump's future - Now is when it gets murky:

Trump’s loyal supporters will never abandon him even in the light of all of the corruption evidence. Next - A not so clear electoral majority in the presidential election of 2020 with a larges swing state "to close to call". The final outcome hangs in the balance. Sound familiar? (Florida 2000)

Trump will plead election fraud again, and stop any recounts, throwing the matter to the Supreme Court. The stacked Supreme Court will stop the recount(s) and will award the election to Trump. (Bush v. Gore 2000).

Personal note: I was at the epicenter of this drama in 2000 and still have my sample "Butterfly Ballot".  A piece of history.

If you think all the voter wrangling today in the Florida 2018 election is about Nelson vs Scott, think again. This is just the pre-show for 2020. 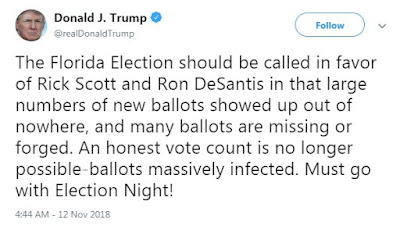 There is no legal or physical proof that this is true.

Trump knows he must stay in office to avoid being convicted of all the crimes uncovered by the Mueller investigation, The Southern District of New York and prosecuted by New York's Attorney General. He will accomplish staying in office by court manipulation.

At his point, it is obvious that he has never had any interest but his own in the forefront. 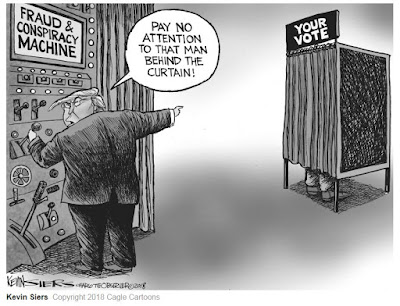 The House of Representatives and The Senate, stuck in gridlock, will become irrelevant (much as they are now) under this stream of executive orders.

Trump will be President for life and imperial ruler. The United States as we know it now will no longer exist.