We’re up against a crisis I never thought I’d see in my lifetime: a dictator-like attack by President Donald Trump on everything this country stands for. As last week’s impeachment hearings made clear, our shared tolerance and respect for the truth, our sacred rule of law, our essential freedom of the press and our precious freedoms of speech — all have been threatened by a single man.

It’s time for Trump to go — along with those in Congress who have chosen party loyalty over their oath to “solemnly affirm” their support for the Constitution of the United States. And it’s up to us to make that happen, through the power of our votes.

When Trump was elected, though he was not my choice, I honestly thought it only fair to give the guy a chance. And like many others, I did. But almost instantly he began to disappoint and then alarm me. I don’t think I’m alone.

Tonight it pains me to watch what is happening to our country. Growing up as a child during World War II, I watched a united America defend itself against the threat of fascism. I watched this again, during the Watergate crisis, when our democracy was threatened. And again, when terrorists turned our world upside down.

During those times of crises, Congress came together, and our leaders came together. Politicians from both sides rose to defend our founding principles and the values that make us a global leader and a philosophical beacon of hope for all those seeking their own freedoms.

What is happening, right now, is so deeply disturbing that instead of the United States of America, we are now defined as the Divided States of America. Leaders on both sides lack the fundamental courage to cross political aisles on behalf of what is good for the American people.

The vast majority of Americans are busy with real life; trying to make ends meet and deeply frustrated by how hard Washington makes it to do just that.

But this is it. There are only 11 months left before the presidential election; 11 months before we get our one real chance to right this ship and change the course of disaster that lies before us.

Let’s rededicate ourselves to voting for truth, character and integrity in our representatives (no matter which side we’re on). Let’s go back to being the leader the world so desperately needs. Let’s return, quickly, to being simply ... Americans.

My Note:  This is a well written piece.  I do not think that history is going to look favorably on the leaders that do not stand for the law and continue to support the chaos surrounding the current president. Please read:  We Are Being Erased on Diana's site. 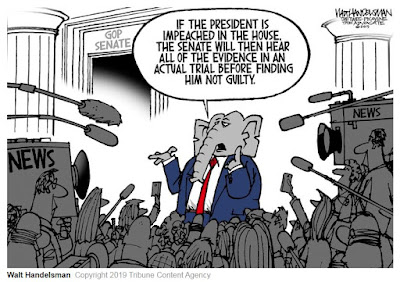