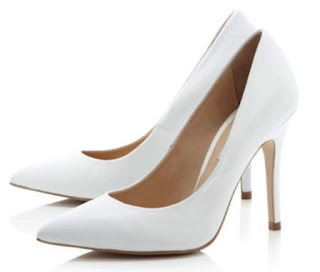 The Sunday after Labor Day, Caroline ran down the stairs on her way to church.  I stared at her feet in disbelief.  “Caroline!” I exclaimed.  “Your shoes! ”  The tone in my voice was as dramatic as if a robber had broken into the house. “Oh, Mama!  I forgot.”  She ran upstairs and reappeared wearing a darker, more appropriate color.  To my relief, the child understood the importance of this unspoken rule.   “Oh.” I reflected.  “I have done a wonderful job raising a true Southerner belle.  She did not protest, fuss or whine…..she protected herself from scandal and preserved our family honor.


It is one of our Southern traditions;  no white shoes after Labor Day.


The day after Labor Day is secretly celebrated as finding out who is one of our kind.  A true Southern woman only has to glance down and have her curiosity and heritage satisfied. It is a private club with no meetings and only one activity.  The dues, however are enormous. 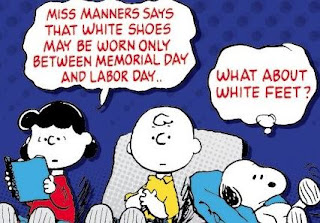 Not 24 hours later, I was in conversation with another Southern sistah answering questions regarding this issue.  The person asking questions was a transplant….a Northerner. My sistah Belle is an Olympic Gold Medallist for Southern accents.  Her explanation was as smooth as molasses. “Why, Honey,” she said to our Northern friend,  “it’s our-uh Southern ways.  You ah here-uh now and this is the how we ah.  I was taught by my Momma and otha kin the golden rule of no-white-shoes after Labor Day when I was fo-wa years old.”

Believe it or not, there is a book written called, A Southern Belle Primer, or Why Princess Margaret Will Never Be A Kappa Kappa Gamma. The author reminds us that every Southern belle learns the white shoe rule from birth. “In the South, where one’s roots are everything, a true belle would never think of breaking the code. She would never wear white shoes after Labor Day, put dark meat in her chicken salad, and never marry a man whose mother owns silver plate, and not real silver.” Frankly, I was impressed by our Northern friend.  She did not say, “Well, it’s a stupid rule.  Up North we wear what we want to when we want to.”  Bless her Yankee heart, she was trying to adapt to the nuances of our Southernisms.

What is all this fuss about not wearing white shoes after Labor Day?   Maybe it started at the Twelve Oaks barbeque when our dear Scarlet was “pea green with envy” when her beloved Ashley was taken up with his cousin, Melanie Wilkes.  Maybe it was after Labor Day and Melanie hiked-up her skirt showing her white petticoat and a pair of virgin-white, church pumps. I’ll bet Scarlet was so angry she blurted the words that started the whole trend, “That ol tacky Melanie Wilkes is wearing white shoes after Labor Day.  I thought her kind knew better.”  I read up on the real answer….something about white shoes in the summer being cooler and dark shoes in cooler temperatures being warmer.  I like my story much better.

This “shoe tale” has a rather cute ending.  My Northern friend, in her best attempt at a Southern accent quipped, “Why Suga, I cannot believe you ar-uh actually drivin’ that white car after Labor Day.”

"Rules are meant to be broken!" -  Douglas MacArthur
Posted by rhonda's escape at 5:00 AM