Confidence Is Always In Style.


We all are pursuing the perfect body.  I would love to be thinner - a lot thinner.  And, heaven forbid, a little taller.  According to the site "The Greatest", desiring the ideal female body is like shooting a moving target:


But if you’ve ever found yourself wishing for this actress’s waist or that singer’s legs, remember this: The media’s concept of the ideal woman’s body isn’t static. Whoever People magazine deems “most beautiful” this year is just a representation of what has bubbled up in the cauldron of pop culture. That silhouette of the “ideal woman” has been put through a series of fun house mirrors (fashion, movies, pop music, politics). It also changes year over year, so the physical qualities we embrace today are often at odds with those from previous generations.

Many of us remember the figure of Marilyn Monroe, that was touted as the ideal female body of the 50's-60's. She had curves. Desired were tiny-waist, and large large-chest. Fashion also showcased this body type with the rounded shapes of sweetheart necklines and circle skirts adding to the illusion of curves.


The swinging 60s brings the pendulum back in the other direction. Thin is in. And Jessica-Rabbit proportions are out. The look is now fresh-faced, girlish, and androgynously trim. Models like Twiggy and Jean Shrimpton (aka “The Shrimp”) represented a new ideal: doll-faced, super slender, and petite. The clothing supports this look: shrunken shift dresses remove the cinched waistline, and fashion demands of a smaller bust and slim hips. (Sound familiar? It’s the same dramatic swing we saw from Gibson girl to flapper.)

In the 80's the "Amazonian" supermodels reign supreme. These tall, leggy women come to represent the new feminine ideal. Women like Elle MacPherson, Naomi Campbell, and Linda Evangelista lead the stampede off the runway and into the heart of pop culture, dominating the media and music videos of this decade. Tall was back - Petites need not apply.

The 1980s also ushers in an era of fitness, thanks to a pioneering Jane Fonda. Aerobics and jogging take off, and for the first time, muscles are acceptable and desirable on women. It’s both empowering and discouraging—one more beauty standard to add to a lengthening list.

See many more images and generation figure changes in the article: See How Much the "Perfect" Female Body Has Changed in 100 Years (It's Crazy!)


Body ideals, like everything else in pop culture, are a trend. As Tina Fey wrote in Bossypants, “Now every girl is expected to have Caucasian blue eyes, full Spanish lips, a classic button nose, hairless Asian skin with a California tan, a Jamaican dance hall ass, long Swedish legs, small Japanese feet, the abs of a lesbian gym owner, the hips of a nine-year-old boy, the arms of Michelle Obama, and doll tits.” Rather than chase that preposterous laundry list of attributes, embrace what your momma gave you! And remember: The media’s idea of beauty is subjective and changes, but confidence is always in style. 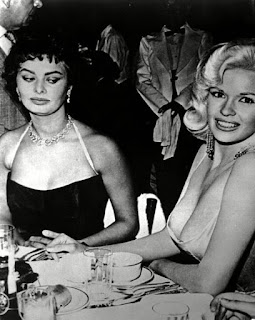 The photo that raised millions of eyebrows: Sophia Loren gave a disapproving look at Jayne Mansfield in 1957
during a cocktail party at the Beverly Hills Hotel
Posted by rhonda's escape at 5:00 AM