Have you ever wanted to put an end to your other identity? What part would you be ending even if you could separate them?  The movie Peacock (2010) staring Cillian Murphy (Breakfast on Pluto), Susan Sarandon, Bill Pullman and many other Oscar winners, tells a story of a man suffering from Dissociative Identity Disorder or multiple personality disorder, as it was previously know (MPD). In my opinion, to equate this to just MPD is a stretch. I see a man who is transgender trying to understand why there is also a female component of his personality that is demanding to exist. He regales her into a "denial world", as many of us have also done.

Here is one synopsis of the movie from the GENDER VARIANCE IN THE ARTS site:

Caution: This review may contain spoilers 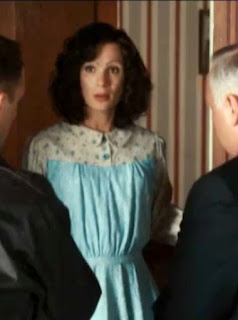 John has a low-level job in a bank in small-town Nebraska.  Every morning Emma, whom no-one in town has met, makes his breakfast, does the washing and leaves him a note for shopping. John keeps a tin box under the outside stairs so that Emma will not know about his savings account and his sports cards. The room of the recently deceased Mrs Skillpa has been left untouched.  Only a few minutes into the film we find out that John and Emma share the same body.  One day a train caboose slips off the tracks and ends up in the Skillpa back yard as Emma is putting out the washing.  This results in others meeting Emma.  The local mayor wishes to use the derailment for political advantage.  Emma is pleased to let him,  John is antagonistic.  Maggie comes by to ask why there have been no cheques since Mrs Skillpa, John’s mother, died.  Emma drives her home and finds out that Maggie’s son was fathered by John – an attempt by Mrs Skillpa to make a man out of her son.  Fanny Krill attempts to recruit Emma for her work at the women’s shelter, which results in John missing time at work.  John attempts to run from Emma and the memory of his mother, and takes a room at the local motel.  However when he opens the overnight bag that he has brought, he finds the dress and wig that define Emma.  Emma decides to kill off John.  She picks up a man, takes him the the motel room, kills him, dresses him in John’s suit and sets the room on fire.

The movie makes for a super interesting point of intersection. If you saw the movie (DVD) please comment. If not it is must see for our community. Cillian Murphy make a beautiful woman and gives all of us a chance to think "What If?"

The Trailer for Peacock
Posted by rhonda's escape at 5:00 AM