History - A Time When Cross Dressing Was A Crime

In the 1940s, '50s and '60s, police arrested LGBTQ people based on an informal "three-article" rule. The Stonewall Riots helped turn the tide against these arrests.


At that time you had to have three pieces of female attire” in order to avoid being arrested for cross-dressing.

Laws criminalizing cross-dressing spread like wildfire around the United States in the mid-19th century. New York’s, dating back to 1845, was one of the oldest. It declared it a crime to have your “face painted, discolored, covered, or concealed, or [be] otherwise disguised… [while] in a road or public highway.”

The state originally intended the law to punish rural farmers, who had taken to dressing like Native Americans to fight off tax collectors. But as scholar William N. Eskridge, Jr. recounts in his encyclopedic book Gaylaw, “by the beginning of the 20 century, gender inappropriateness… was increasingly considered a sickness and public offense.”

Existing laws against costumed dress, even if they didn’t specifically mention cross dressing—collectively referred to as “masquerade laws”—were increasingly pressed into service around the country to punish gender variance.

That these laws were often ill-suited to the task didn’t matter.

In Brooklyn in 1913, for instance, a person who we would today call a transgender man was arrested for “masquerading in men’s clothes,” smoking and drinking in a bar. When the magistrate noted that the state’s masquerade law was intended only to criminalize costumed dress used as a cover for another crime, the police were forced to let the man go. However, they promptly re-arrested him, charged him with “associating with idle and vicious persons,” and found a new magistrate to try the case.

When he was found guilty and sentenced to three years in a reformatory, the judge made it clear that despite the new charge, he was being punished for his dress:


No girl would dress in men’s clothing unless she is twisted in her moral viewpoint,” the magistrate proclaimed from the bench, according to a September 3, 1913 article in the Brooklyn Daily Eagle.

Many men dressed as women were locked up on charges of masquerading and indecent exposure at the National Variety Artists' Exotic Carnival and Ball held at the Manhattan Center in 1962. Police and detectives herded the costumed guests into police wagons in front of the ball.

As America’s fear and panic over LGBTQ people became increasingly vocal and widespread in the mid-20 century, arrests like this became more and more common. Still, those arrests primarily revolved around 19th-century masquerade laws, none of which specified a number of articles of clothing to avoid arrest. So where does the idea of the three-article rule come from?

Kate Redburn, a JD/PhD candidate in queer and trans legal history at Yale University (who uses the gender-neutral pronoun, "they"), has discovered a few clues in their research. First, they say that mentions of the three-article rule are almost all retrospective, meaning they come up in interviews and memoirs about the 1940s, ‘50s, and ‘60s, but not in documents actually produced in those years.

Second, none of the cross-dressing laws they could find mentioned a specific number of clothing articles. Curious, they turned to more esoteric sources of legal codes, including military law and police procedural manuals (which lay out how a law on the books should be put into practice on the ground). When those also turned up nothing, they came up with two explanations: either the three-article law was an informal rule of thumb used by the police, or, essentially, a term used by the LGBTQ community as a way to easily warn each other.


Christopher Adam Mitchell, who researches LGBTQ history at New York City’s Hunter College, came to a similar conclusion. In the mid 20th century, he said, both the police and LGBTQ communities around the country were becoming more interconnected, making it easier for this kind of information to flow between localities, which explains why it gets referenced everywhere. Mitchell also noticed an additional wrinkle: gay men and transgender women who mention the three-article rule were usually being arrested in bar raids. Lesbians and trans men, on the other hand, were being accosted in bars and on the streets. 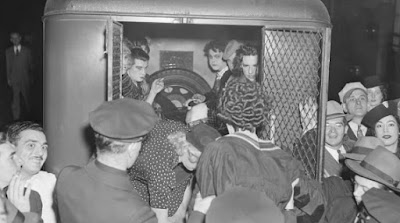 “Police were using this to check their underwear,” Mitchell says, using the law as an excuse for street-level sexual assault and sexual humiliation.

However, the greater danger to gender nonconforming people during this period, Mitchell suggests, was street violence, which was much more prevalent than street cross-dressing arrests—although the two sometimes went hand in hand.

New York City resident Martin Boyce recalls that on Halloween, 1968, a cop collared him in Queens because his Oscar Wilde costume was too feminine. Boyce argued back, brandishing the receipts from the unisex store where he’d bought his clothes. Their argument attracted the attention of a nearby gang. The police officer, frustrated by Boyce’s resistance, acquiesced to Boyce’s arguments—and then turned to the gang, saying. “He’s all yours.” The gang was so amused by Boyce’s defiant attitude, they let him pass unharmed.

Think this could never happen again?  There are those in the political arena that would like to return to that time.
Be visible.   Be Active.   Vote!