A Ban on Conversion Therapies

I found this on the CrossDreamer's BLOG.  It is likely that you have seen it but just in case I have posted it below.  This is so relevant and important it is worth our attention.  The full report.


US Report Calls for Ban on Conversion Therapies for Gay, Lesbian and Transgender Youth


A short little update here on LGBT policies in the US, as it may help many of us gain some perspective on where the general consensus is right now as regards sexual diversity and gender variance. 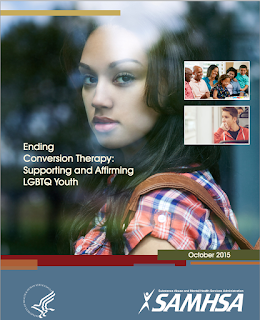 The US Substance Abuse and Mental Health Services Administration (SAMSHA) has published a report on so-called "conversion therapies", based on a thorough review of current research.

The expert panel was set up by SAMHSA and the American Psychological Association (APA) earlier this year, and included prominent American figures in LGBT human rights, policy, research, treatment, and advocacy.

"This groundbreaking report dispels widespread misconceptions about sexual and gender development and definitively concludes that treatments designed to change a child's sexual orientation or gender identity do not work, are devastatingly harmful to 'victims' of this type of therapy, and should not be considered appropriate mental health services," Dr. Celia B. Fisher, who served on the expert consensus panel says.

Conversion therapy does not work

Indeed, the main conclusions in the report are clear:

Gender variance is not pathological


The message from the American Psychological Association is also clear: Being a sexual or gender minority, or identifying as LGBTQ, is not pathological.
The report discuss different life trajectories of transgender people, but do not set them up against each other, or give them different status or value. Both early onset and late onset transgender people are included, and female to male as well as male to female.

The report takes, as much research on transgender today, biological factors into consideration. But the expert panel is also very much aware of the way social forces shape the lives of transgender:


"While most adolescents with gender dysphoria score within normal ranges on psychological tests (...), some gender minority children and adolescents have elevated risk of depression, anxiety, and behavioral issues. These psychosocial issues are likely related to if not caused by negative social attitudes or rejection (...).

Indeed, the experts stress that the development of gender identity "appears to be the result of a complex interplay between biological, environmental, and psychological factors."

The basic principle for health care for LGBT youth is simply to give them room to find out for themselves who they are. The goal of the treatment should be "the best possible level of psychological functioning, rather than any specific gender identity, gender expression or sexual orientation."

No support for transphobic science

As some of my readers will know, the extremist tribe of sexology, Ray Blanchard and J. Michael Bailey included, continue to argue for conversion therapy for feminine boys and those Blanchard call "sissies". But then again they consider male to female transgender people mentally ill.

It is clear that they find little support for this in the research and health communities. They will also find little support for the idea that they, as scientists, somehow stand outside the realm of ethics. This expert panel is acutely aware of the ethical responsibilities of scientists and health care providers.
http://www.crossdreamers.com/
Posted by rhonda's escape at 3:14 AM