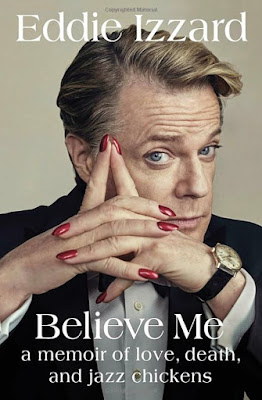 I just completed reading the book "Believe Me" by Eddie Izzard.  It is excellent and is peppered with compelling stories and experiences of being transgender. Unlike the Jenner book that I read before, Eddie is truly one of us. He knew very young the he was different and had an interest in dressing up.

There is a story of sneaking out of his boarding school dorm after everyone had gone to bed.  There he found a box of costume dresses and tried them on. That sound like something any one of us would do, given the opportunity.

His acceptance did not come easy and many of his accounts ring true. Yes, in parallel with many of our experiences. Telling his brother; telling his father; his strength in knowing that he had to be out. His account of his first time out could be any one of our stories.

Here is the start of his "My First Day Out" chapter:

Id’ been going to the TV/TS Help Group for about two months before I actually left my flat wearing makeup and a dress.  At the help group I had been talking to a young lesbian woman, I liked and I had thought, Hey, can I have a relationship with a lesbian woman. Does that work?

But at that point of my sexuality-and-confidence-advancement mission. I wasn't quite up for pursuing a relationship. So instead I just ask her. "Will you come with me and just accompany me the first time out wearing makeup and a dress?"

Luckily she said yes, so we agreed to meet somewhere in town for tea or coffee and have a day in the center of London.

I could get out of the house in a dress because I was living with five medical students and I was familiar enough with their schedules to know when they wouldn't be home. Getting ready and leaving when no one was there didn't seem too difficult.

Getting back in the house without being noticed would be the challenge.

So I made a plan to go to the ladies' loos on Highbury Fields to change my clothes before returning home.

Most of what I remember about my first day walking around outside in makeup and a dress was fear. The fear of being stared at, which I knew I would be. This was partly because I wasn’t  that good at applying makeup. I'd bought a book about how to and then tried to teach myself, but I didn't have older sisters to practice with or on.

So I went out and hung out with my friend from the help group, and I made it through. Until it was time to go back home...


There is much more to the story and you must read about what happen next with an encounter with three teen girls on his return to the "loo" to change back.


One of his passion is running. He challenged himself and used the opportunities as a fund raising tool. One of his challenges was to run 27 marathons in 27 days in a tribute to the 27 years Nelson Mandela spent in prison before becoming the first black president of South Africa. At the time he was 54. During the process he lost one day to an health problem, and on the final day he had to run two marathons to meet his goal.  An amazing and almost impossible accomplishment, detailed in the book.

Before attempting his 27 marathons in 27 days in South Africa, he completed 43 marathons in 51 days in the UK.  In his own words:

"I came out as transgender 30 years ago and that was tricky to do. It sounds bizarre but, ever since that point,I’ve been able to do quite difficult things. Running 43 marathons in 51 days was one of the hardest things I have ever done but still not as hard leaving my flat that first time, wearing a skirt and heels. I had to get my brain ready to do that. But it prepared me for everything else difficult that I’ve ever done in my life."


A must summer read.