The term hypocrisy has found a depth the exceeds contrivance in the evangelicals support of Trump. Some of this is rooted in the racial bigotry of having a black president, however it runs far deeper. There is a complete “turn the blind eye attitude” to Trump and being in total denial of the person they support and elected. Michael Tomasky in a DailyBeast article describes Trump this way:

“The only path Donald Trump walks is one of raging ego and self-promotion. He stiffed contractors, cheated business associates, lied casually and constantly, grabbed women (brags of sexual assault). And ran for president not as a man who’d found a better path, but as that very man, one who’s never changed and never will change.”

These facts are undisputed along with many more. One of the most egregious; referring to whole nations and continents as “Shit Holes”. He has denied this although this is not out of character and credible witnesses back up the fact he did say this.

Trump is willing to deny basic human rights to the DACA "Dreamers" who, as a majority, are American in every way but papers. An operative made a payments to a pron star on Trumps behalf.  He is setting aside basic dignities needed by transgender individuals.  And the list goes on....

Does any pat of this represent Christianity? 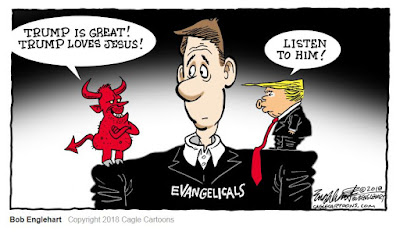 Franklin Graham, the son of famous evangelist Billy Graham has learned very little from his father, much less the Bible. Billy Graham, one of the nation’s most well-known evangelists, is now 99 and is living in retirement in North Carolina. During an interview with an evangelical magazine, he was asked if he had any regrets over his long career. When asked in 2011 at a Church & State People Event, he stated that he wishes he hadn’t been so political during parts of his career.

I also would have steered clear of politics. I’m grateful for the opportunities God gave me to minister to people in high places; people in power have spiritual and personal needs like everyone else, and often they have no one to talk to. But looking back I know I sometimes crossed the line, and I wouldn’t do that now.

What the bible teaches (Exodus 34:6-7) is that “if a father misleads his family, the family will pay.”  Has not the Graham family learned anything? Take a look at Franklin Graham's defense of Trump and note that in the end, he states that “God has put him there" (as president).  Dog help us! (Dyslexic mistake intentional.)

Collateral damage be damned… Unimaginable hypocrisy in the light of political expectancy!