He Wants to Be a Ballerina

He Wants to Be a Ballerina.
He Has Taken the First Steps.

For the first time in modern ballet history, a male dancer is performing as part of the female ensemble at an international ballet company, signaling an important moment in an art form that often celebrates a particular ideal of femininity. Or, as the great choreographer George Balanchine said, “ballet is woman.”

But in a world with a heightened awareness of gender fluidity, and with transgender people increasingly accepted in a variety of professions, including acting and modeling, ballet is taking its own brave leap.

“I want to be seen as a ballerina,” said Mr. Johnsey, an American, who identifies as gender fluid but uses male pronouns. “My hair is up, I wear makeup, female attire. I am able to do female roles and look the part, so that is artistically what I do.”

Tamara Rojo, the director of English National Ballet who offered Mr. Johnsey a short-term contract in March, said she was “very sensitive about this being seen as a publicity stunt.” Instead, she said: “This is about reflecting the world we live in. There are different races, cultures and beliefs in our company — this is another aspect of that view.”


But stringent physical norms still matter in ballet. It’s not like the theater, which has embraced gender-switching with all-female accounts of Shakespeare, say, or Glenda Jackson playing King Lear. These may require some suspension of disbelief from the audience, but not a fundamental change in appearance or skill from the performer. 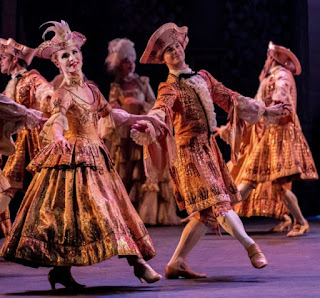 Chase Johnsey performing in the English National Ballet’s production of “The Sleeping Beauty” at the Coliseum Theater. Mr. Johnsey was performing as part of the female corps de ballet.
Photo Credit: Tom Jamieson for The New York Times


It is actually strength, hidden within softness and grace, and I have had to figure out in my genetically male composition, how to find that.
Chase Johnsey

“I think ballet can be the perfect environment for gender fluidity,” Ms. Rojo said. “We are in a position where we could open up roles for lots of people. Obviously certain roles require physical strength for lifting, and are less obvious for crossover. But the potential is there.”