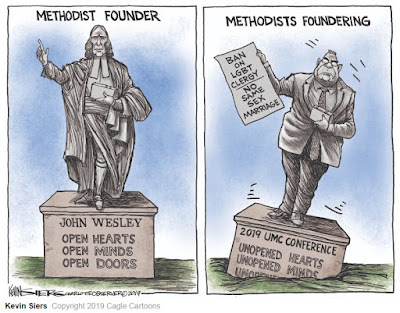 Rural southern life in the '50s revolved around church activities. There were Sunday morning services that involved "Sunday School" and after "Preaching", the more formal service.  Sunday evening was the youth service, Wednesday night was choir practice, and many Friday evening's there was a pot luck dinner at the church community room. Your religious, and social life, all-in-one.

My little village had two churches; Methodist and Baptist. Similar in that both are Christian however very different. The Baptist belief was much more fundamentalist (strict) in teaching and the Methodist more liberal.

My grandmother and grandfather were both pillars in the two churches.  Sunday morning my grandfather went to the Baptist Church and my grandmother to the Methodist. Although partners in the general store, and all other aspects of their lives, they attended different churches on Sunday morning.  There was never a disagreement or discussion - that was just a fact. I never knew why.

I attended the Methodist church with my mother and grandmother. Which bring me to today's topic.  Although not a member of any church or religious at this time, I have never been ashamed about my childhood religion - until this week.


By Timothy Williams and Elizabeth Dias (New York Times) ST. LOUIS — The United Methodist Church on Tuesday [February 26] voted to strengthen its ban on gay and lesbian clergy and same-sex marriages, a decision that could split the nation’s second-largest Protestant church.

After three days of intense debate at a conference in St. Louis, the vote by church officials and lay members from around the world doubled down on current church policy, which states that “the practice of homosexuality is incompatible with Christian teaching.” The vote served as a rejection of a push by progressive members and leaders to open the church to lesbian, gay, bisexual and transgender people.

Now, a divide of the United Methodist Church, which has 12 million members worldwide, appears imminent. Some pastors and bishops in the United States are already talking about leaving the denomination and possibly creating a new alliance for gay-friendly churches.


In a time where mainstream religion is losing members, I question the logic in this action. Possibly an example of how the bigoted, narrow-minded are feeling emboldened to express their hate and inflict their biased attitudes on others.


Counter this by being visible. Speak up! 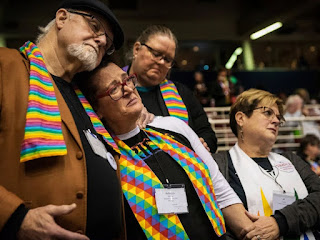 Members of the United Methodist Church reacting to the defeat of a proposal that would have allowed gay clergy and same-sex marriage, at a church conference in St. Louis on Tuesday.