We need wonderful success stories like this one.  Enjoy and dream.  I had one reader this morning thinking this was about me and my "Feminine Differential - The Ultimate Dress" experience. No. However, read my account of visiting a bridal salon if you have not already. I did feel like a princess.

It came just days after she stormed into the spotlight at London Fashion Week. She is now legally recognized as a woman on her passport and driving license. Nicole has told MailOnline:

Her Instagram page is splattered with selfies in her lingerie, poolside pictures in bikinis, catwalk snaps in bridal gowns and images of her curled up on her bed with her dog. 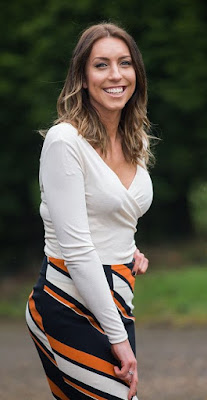 Yet 36-year-old Nicole Gibson is not your typical Millennial model: raised as a boy, the 'Unexpected Star of London Fashion Week' had a sex change operation just days after making her modelling debut in the autumn of 2013.

Now the five feet 11-inch model is living life as a woman – she is legally recognised as female on her passport and driving licence.

She has been signed by the new agency Classic Models, joined dating website Tinder and flirts with the boys at the local rugby club, where she works as a barmaid.

Her transformation to a woman has been so successful, and so convincing, that Nicole claims even her sexual partners cannot tell she was born a man.

Nicole, who lives in a quaint cottage in the rambling countryside in Warnham, West Sussex, was not always so comfortable in her skin.

Born as a boy named Glen, she always felt an affinity with little girls, fantasizing about dressing up in women's clothes and pretending she was Elizabeth Taylor in the 1976 film Blue Bird.

Bullied at her secondary school, Tanbridge House, where she was given the nickname 'Glenda the Bender', she eventually came out as gay when she was a student at Collyer's sixth-form college, where she studied English Literature, theater studies and performing arts, alongside TV presenter Holly Willoughby.

... Nicole has been signed to Classic Models, which has promoted her as a bridal wear model. The highlight, so far, was walking down the catwalk for Estilo Moda at Woburn Abbey. 'That was an amazing experience,' she adds. 'I was just away with the fairies'.

'I got to the end of the catwalk and spun around like a princess. I've always dreamed of my wedding day. Now I just need to find my prince.'

There is much more to learn by reading the whole article and many photos.