This 13-Year-Old Girl Is Out To ‘Change The World’


Think back to when you were in school. Ten, 11 years old, and you’re called to speak before the class, about who you are.

Rebekah Bruesehoff did that before a crowd of 200 strangers when she was 10. The following year, she traveled to Houston and did it again, in front of 31-thousand people, at the Evangelical Lutheran Church in America Youth Gathering. Her father is a Lutheran minister.

“I’ve learned that by being who God has called me to be, and by telling my story, hearts and minds are changed,” declared the 11-year-old girl in hot pink pigtails. “I can change the world!”

And what she wants to change about the world most of all is how it sees girls like her. Clearly, Rebekah is not just any ordinary girl, and yet that is exactly the message she conveys at every opportunity. 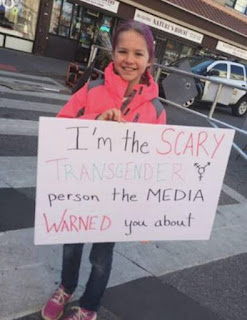 “Transgender kids are just like other kids,” she told the gathering. Rebekah is transgender.

Now 13, Rebekah already has quite the resume. She’s a straight A student, plays clarinet, loves to dance ballet and is also on the field hockey team. Given the lockdown because of the coronavirus pandemic, she’s spending every day at home with her parents and two younger brothers in Sussex County, N.J. “It’s pretty bizarre,” she said, “not getting to go anywhere.”

But the lockdown has not diminished her activism. In April she led a daily online storytime session on Instagram and Facebook Live, reading LGBTQ+ books to younger school children, alongside her mom, writer and speaker Jamie Bruesehoff.

Late last year, Marvel Comics chose her as the inspiration for a new transgender superhero, Mighty Rebekah, as part of its Marvel’s Hero Project. The idea is to highlight everyday kids who are doing something extraordinary. Not only did the artists create a comic book that focused on her bravery as an activist, Rebekah and her family were featured in a Disney+ documentary.

And just this week, another crowning achievement: Rebekah was named a GenderCool Champion, in an announcement on the group’s Facebook page and on Twitter.

Thanks Caitlin for sharing this article.