Why We Deserve Better Trained And Educated Law Enforcement

Content Warning: This describes a negative outing highlighting local police incompetence / bias. This was written last summer at the peak of glaring instances of police injustice. I wish things had improved. The event of note occurred about ten years ago.
White male privilege is a reality. If you do not believe me, give it up for an hour, a day, a job.  I have been on job interviews where I was likely the most qualified candidate and the least young/prettiest female in the room.  What do you think happened?  Bias is ever-present.

America is going through a convulsion and reality lesson on how systemic, racially motivated law-enforcement profiling has come full circle. The militarization of policing after 911 has created an “us-vs-them” attitude that endangers. Look different or be in a place that is outside “normal”, then a supposition of wrongdoing / guilt is inferred.

Minorities have known for years that the “driving-while-black” traffic stop was inevitable if your vehicle is new/luxury.  Minority parents are required, out of fear for their children's safety, to have “the conversation” thus educating on the reality of surviving a law enforcement encounters.

Fact - We are all one profile or “mistaken identity” away from a life-changing disaster. Understand this!  Meaningful law enforcement reform is needed.
__________________

I have hesitated for years on telling the story that will follow for two reasons. One: Remembering the incident triggers a visceral PTSD response. Two: It may cause undue trepidation. I tell this story now only to help emphasize what minorities and women, in general, know instinctively. Understand - White male privilege does not provide total immunity when you present outside of your privilege.
About ten years ago I was volunteering several days a month at a local, small non-profit.  It was a worthwhile endeavor that collected financial donations and supplies for remote Central American schools. The non-profit built and ran several schools that taught the basics to indigenous people in remote villages of Guatemala. The donation that came in went directly to the intended population. I was very proud to help with the donor database and accounting.

Another volunteer occasionally came in to help with mailings and we would talk and interact.  Out of the blue one day she asked if I was from Canada?  Although I have not lived in Southern Virginia for over 40 years, a few words that were characteristic from my childhood home lingered; “house”, about”, and “out”. This was not the first time I had been asked, so I explained this incongruity; "no, I am not from Canada" and stated it is a regional southern accent.

Based on the TV show that she has recently seen, "America’s Most Wanted” (in this case showcasing Canada's Most Wanted) she suspected I was a male Canadian fugitive in hiding. She called the police. My local police contacted the Canadian RCMP and they explained they believed the suspect had died years earlier. However, being that this was still an unsolved case, the RCMP did share some vital information. The suspect was 6 foot - 2 inches, heavy build, bald, very hairy body, chain smoker, worked minimal day jobs, and was a loner. For the record, I am 5’  4”, a full head of hair, minimal body hair, and gregarious. Also, I have never smoked. And, I had lived in Florida for 40 years (only 2 addresses), owned a business, and during the period in question, I was married with four young children (three born in Virginia and one in Florida); all of which was public record. Not exactly living the on-the-run, fugitive lifestyle.

Still undeterred by the thought process, the Jupiter Police Department (JPD) put me under 24-hour surveillance and went to a judge for an arrest warrant. The judge told the police that their case was weak and would provide only a limited search warrant “obtaining fingerprints” to be used in comparison to the Canadian fugitive.

Several days later, actually on my birthday, while driving to another volunteer job, I saw blue lights in my rear-view. Thinking I must have done something wrong, I slowed and pull over. As I pulled over there was not just one police car with blue lights but three. Another two unmarked cars blocked my front and driver’s side. There were officers with guns drawn approaching both sides of my car from the rear.  Was I going that fast?
Getting out of the unmarked cars were three other plain-clothes offices with guns drawn.  Never in my life had I been so scared and been in the presence of so many guns. I was told to exit my car with hands above my head and then stand with my back against one of the police cars.  I was told by a detective that my “assistance was needed” and I was going to be driven to the local police (JPD) station. I felt very ill and was near collapse. Ask if I was OK, I answered “NO”. No one cared. After that, I said very little.
FYI - This day I was in complete male attire.

I was not told anything else at this point, nor read any rights and was placed in the back seat of one of the unmarked police vehicles. I was caged in and there were no door handles.  After about a 5 minute drive to the JPD, I was taken out of the car and escorted by 4 offices into the holding-arrest area. Two cells with bars were to my right.  Also as I entered the building, I noticed several television news trucks were setting up in the parking lot.

I asked if I needed an attorney and wanted to know what was happening? I was told that I was being compelled to provide my fingerprints and an attorney at this point would not change anything. I complied and was scared. I was not placed in a holding cell and after providing my prints was shown a bench where I could sit.  It was either sit or fall. My wallet, cell phone and keys were taken.

About 30 minutes went by and no further information was provided unit I was instructed that a full hand-print was also needed and I was re-inked to provide that. The detective came out after another 30 minutes (seemed like hours) and proceeded to recount the horrific acts that a Canadian fugitive had perpetrated on a child. He seemed angry and agitated. After that recitation, I was told that I was not a suspect.  After briefly justifying their actions of the morning, I was told that my fingerprints were not a match and I was free to go. “Mistaken identity” was the explanation and I was driven back to my car.  No apology was provided. As I was put back into a patrol car, I noticed that the TV trucks were packing up.

It took more than 24 hours for the sick stomach and shaking to stop. Weeks passed before I know the full why/what of the event and came to know about the"America's Most Wanted" connection. After a long and exhausting meeting with the Jupiter Police Chief and lead detectives, I was told – “What did you expect – you were wearing a dress”.  I stood and walked out of the meeting before saying something I would regret later. I could tell one of the steroid-enhanced officers/detectives was about to come across the table.  I felt intimidated and in danger for questioning their actions.
It is my understanding that the judge's records and the police request are sealed and not even I can have access. I was provided a sanitized copy of the warrant after much persistence.

Writing and reliving this is difficult. I have wondered many times how this interaction could have escalated and with police justification, could have gone wrong in so many ways.

Police must be constantly overseen. A runaway law-and-order zealot can do much harm and fully justify their actions.  Please be sympathetic to what is occurring around our country today. Know that we are all one mistaken identity or police encounter gone-bad away from losing all that we hold sacred or even our life.

I stand with those who seek de-militarization of the police. I favor better trained / screened police officers and police reform. Racist, untrained, uneducated, intolerant, bias and homophobic police offices have no place in today's law enforcement.  After today, maybe we have a start on that road.
As always, your comments and rebuttal are welcome. 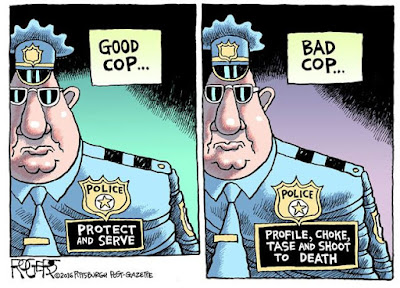