My Note:  I started watching the ABC Series "Big Sky" last evening.  I had recorded (DVR) the first three episodes and became immediately hooked. The character "Jerrie" is an amazing actor, playing an important role. It is worth watching to see the strength, reality and  authenticity being portrayed by her.

If you have missed episodes try and go back and watch on-demand. Also there is a recap at then start of each episode so you can catch up there.

Keitel is the first non-binary actor to be a series regular on primetime television.

When the news was announced Jesse, who uses the pronouns they/them and she/her, took to Instagram to express her excitement for the new role stating: “Wow. So endlessly grateful. HERE WE GO!” 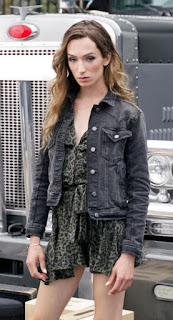 In a recent Q&A with Variety co-star Kylie Bunbury praised Keitel’s work on the series, stating: “First of all, she’s incredible. But she’s representing for nonbinary people, and for ABC to do this and to have Jesse, who is incredibly talented, I feel like that’s worthy of a cheers.”

The new series follows a detective and ex-cop partnering up to find two missing sisters that have been kidnapped by a truck driver in Montana.

Keitel will be playing the character of Jerrie, a young nonbinary musician that unknowingly falls into the trap of the abductor.

Series creator, David E. Kelley described the show as a “thrill ride and a great piece of entertainment at 10 o’clock at night (ABC Tuesday).”