Joe Pederson and His Pearls

Joc Pederson's necklace is the new fashion statement of the postseason. His jeweler has never seen anything like it.

Sports Illustrated — Gabe Arik has made jewelry for baseball players for two decades. He creates the engagement rings they use to propose, the gifts they give, the necklaces and earrings they wear on the field. He estimates that his business, Happy Jewelers, has made thousands of pieces, for players on each of the league’s 30 teams. He has never received a request like the one he got in September.

“I want to do something really different,” Atlanta right fielder Joc Pederson texted him. “I want to make a nice fashion statement. And I’m thinking about pearls.”

“Pearl necklaces are for, you know, women,” Arik says now.

Pederson has been evasive as to the inspiration behind his new fashion statement. On various occasions he has said, “I just saw the pearls and I was, like, you know what? That looks cool;” that there is no story, he’s just “a bad bitch;” and, “It’s a mystery for everyone. They’ll never know.”

Whatever their origin, the pearls appear to be working. Since their debut on Sept. 29, Pederson has an OPS of .953 and one home run per every nine at bats. Atlanta is 10–4 and one win away from the pennant. The team has begun selling replica strands at the ballpark for $5. When Atlanta legend Dale Murphy threw out the first pitch before Game 2 of the National League Championship Series, he first pulled a string of pearls out of his pocket and draped them around his neck.

Arik finds the attention baffling. “This pearl necklace is not very expensive,” he says. “They’re really nice, high-quality pearls, but the retail is, like, four grand. … He has gold chains with diamonds for, like, 40 grand. But this, I don't know. Everybody's talking about it, everybody's wearing it.” 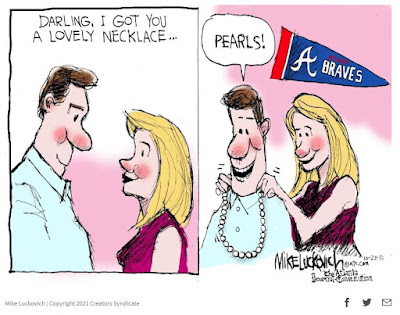