St Thomas (USVI) was another day port on my cruise.

There were not any definite excursion plan for the day so saw just exploring as my best option. The visitor's booth suggested the island of St John. Just outside the port exit there were many open air buses available to the island's west end, Red Hook.  About 20 minutes later we were delivered to a modern passenger ferry terminal for the ride to St. Johns Island. What was most interesting and terrifying about the rides was that the cars/trucks were driving on the opposite side. I guess I was not in Kansas any longer.

Everything you would expect to see on a tropical island escape. I was told later that I should have take a short taxi ride to Trunk Bay Beach, but I was completely taken by the beauty of Cruz Bay's and its island attractions.

An amazing lunch was had at The High Tide Seafood Grill overlooking the ferry port and beach. 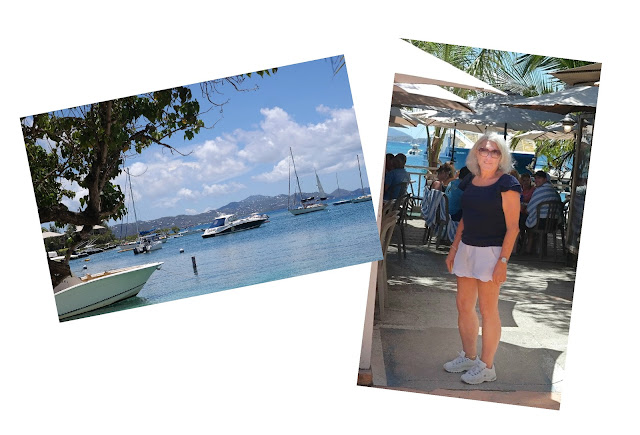 St. Thomas, one of the three United States Virign Islands, along with St. Croix and St. John, St. Thomas is one of the most beautiful island destinations in the world, dressed with powdery beaches and sun-drenched weather. St. Thomas is located in the Lesser Antilles, 1,600 miles south, south east of New York City; 1,100 east, southeast of Miami; 70 miles of San Juan. St. Thomas and its nearby neighbor St. John, lay between the Atlantic and the Caribbean.