She Will  Be First Transgender Star Of Broadway's 'Chicago' This Fall

The "Pose" star is set to take over the lead role of merry murderess Roxie Hart in the smash musical in September.

By Curtis M. Wong Aug 5, 2022
Angelica Ross is officially Broadway-bound.
The “Pose” star will join the cast of the smash musical “Chicago” in the lead role of Roxie Hart, the show’s producers confirmed Thursday. She’ll become the show’s first transgender leading lady.
Ross, whose acting credits also include “American Horror Story,” will begin performances on Sept. 12. Her eight-week run is set to conclude on Nov. 6.
Her casting drew an enthusiastic response from fans and fellow celebrities online.
“The name on everybody’s lips is gonna be… Angelica Ross!” actor Wilson Cruz tweeted, referencing one of the songs from the show. “Congratulations, love!”
Added “MacGyver” star Alexandra Grey: “The girls are on Broadway! Put us everywhere!! We are HERE! Congrats, sis.”
Wikipedia:

Angelica Ross (born November 28, 1980) is an American actress, businesswoman, and transgender rights advocate. A self-taught computer programmer, she went on to become founder and CEO of TransTech Social Enterprises, a firm that helps employ transgender people in the tech industry.
Ross began her acting career in the web series Her Story (2016), after which she received further recognition and critical acclaim for her starring roles in the drama series Pose (2018–2021) and the anthology horror series American Horror Story (2019–present), both from FX. 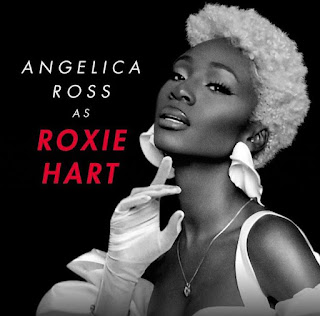 In its 25th year on the Great White Way, Chicago regularly switches out the actors playing America's sweetheart-turned-murderess Roxie, and often enlists TV and film stars to breathe new life into the classic musical.
Ross will appear from September 12 to November 6.
Posted by rhonda's escape at 5:00 AM