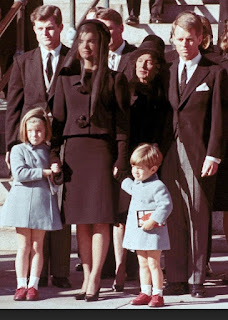 The Strong Kennedy Family
A very interesting photo - I am not sure if these were the actual colors.
Most of the photos showing this event are black and white.

52 years ago, yesterday the unthinkable happened.  It you were of age then, the memory is forever there.  I was in high school, walking up stairs to my 6th period class and heard some shout “Kennedy has been shot”.  Shortly after the start of 6th period, an announcement was made over the PA.  We did not do anything else that day but talk as we were all in shock.  The news of his death came later.

In my area or Virginia, Kennedy had not been the candidate of choice, being Catholic.  However, I believe that the young president and gorgeous first lady had won a large measure of belated respect.  I remember well his handling of the Cuban missile crisis and how it almost took us into nuclear war with Khrushchev.

Where were you that day 52 years ago?