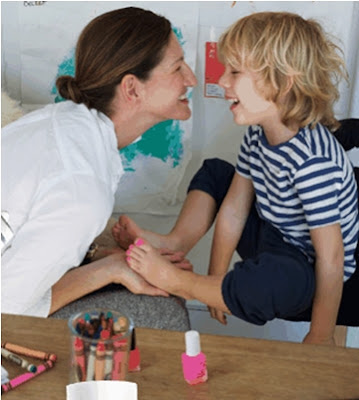 A J.Crew Ad Showing Boy With Pink Nail Polish Sparks Debate on Gender Identity - This was a headline for April 11, 2011 – FOX News.   The article went on:

This J.Crew ad that shows a top designer painting her young son’s toenails neon pink has some parents and doctors seeing red.  The image appeared in a feature called “Saturday with Jenna”  which was emailed to customers last week and highlights a few of J.Crew president and creative director Jenna Lyons’ favorite products -- including the hot pink Essie nail polish seen on her son, Beckett.

The caption below the picture reads, “Lucky for me I ended up with a boy whose favorite color is pink. Toenail painting is way more fun in neon.”

But not everyone sees fun in the ad.  “This is a dramatic example of the way that our culture is being encouraged to abandon all trappings of gender identity,” psychiatrist Dr. Keith Ablow wrote in a FoxNews.com Health column about the ad.

But Jo B. Paoletti, author of “Pink and Blue: Telling the Girls From the Boys in America” told FoxNews.com she believes critics are overreacting.

“Lots of kids, say 7 and under, might ask their parents for something that would seem to be cross gender, and I think most parents, especially in the privacy of their own home might think, what’s the big deal?" Paoletti said.

“What line would that be? Not forcing your child to like a color just because gender stereotypes say they should?” one commenter wrote.

I had this saved from several years ago.  It fits with the two transgender children's books I featured a few months back.  I found the discussion and photo fascinating.  I hope you do to?
Posted by rhonda's escape at 7:55 AM