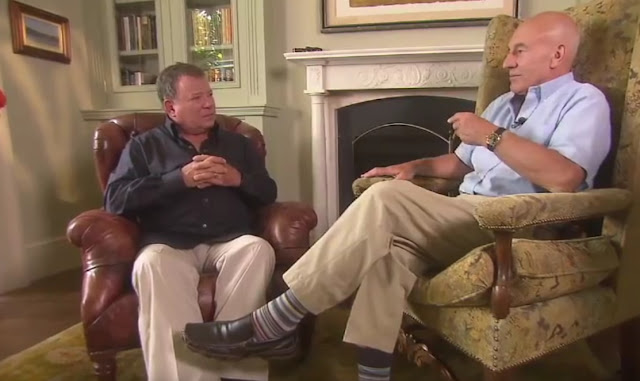 Last evening I attended the William Shatner “One Man Show” and it was outstanding.  2 hours long – no intermission and traced a lifetime of theater, TV, movie, and music - Very honest, and entertaining.   I had a low expectation, having never really been a Trekkie but it was a wonderful evening.  He is 84 and carried if off with clips from shows and many entertaining personal experiences/stories.

One of the clips struck me as very relevant to my life.  He played a clip of a discussion between himself and Patrick Stewart.  We all know William Shatner as captain Kirk and most will remember Sir Patrick Stewart from his roles as Captain Jean-Luc Picard, in Star Trek: The Next Generation and its successor films.

Shatner's full career includes many films, television, live theater and song albums.   Stewart is a famous English actor whose career has included roles on stage, television, and film. His career also includes a long run with the very famous Royal Shakespeare Company which is based in Stratford-upon-Avon, Warwickshire, England.  Therefore, without question these two men are accomplished and need not be defined by a single role.

In the clip that was shown (photo above), both men talked about how being captains in the Star Treck series shaped their careers.  Shatner applauds Stewart’s serious acting career and without question is in awe of Stewart’s talents and accomplishments.  Stewart comments back that he has become very comfortable with the fact that he likely will be most remembered for his role as Star Treck’s Captain Jean-Luc Picard.  He then asks Shatner how he views that.   Shatner pauses for a second and in some magical moment stated that he accepts that also.  Two very famous and accomplished actors accepting a reality.

How many of us accept our own realities - not necessarily created by ourselves.   We lament over society’s limited acceptance of a transgender person, however, have we come to accept the fact that we are transgender.  Yes, many of us are fathers, mothers, professionals, creators, artist, etc. and are defined by these roles.  However, for many of us, the elephant in our own living room is being transgender.  Acceptance first must come from within.

Let us be “Bold” in our own acceptance.