Morning Hurricane Update from South East Florida:  Overnight wind gust up to 60 MPH with strong rain bands. Each rain band passes quickly moving at the speed of the wind. I do have one sliding glass door not covered (protected under the patio) so can watch the palm trees being buffeted by the wind. There are lots of leaves and small tree branches on the road and blowing around the yard.  The streets are deserted.

With each passing wind band tornado, watches are issued. There is lots of wind movement that is not straight-line in a hurricane and this wind can spin up into a tornado. The danger is real however, the tornados are short-lived and resemble more of a waterspout than the typical wide tornado.

Between the wind bands, there is only light rain and light wind. South East Florida is going to be spared the eye wall, which wraps around the hurricane center. The lower Keys all the way up to Miami and the West Coast of Florida are going to have a stressful and dangerous day as the center of the storm touches the coast and come ashore.

If my power and internet hold up, I will post another update later today. 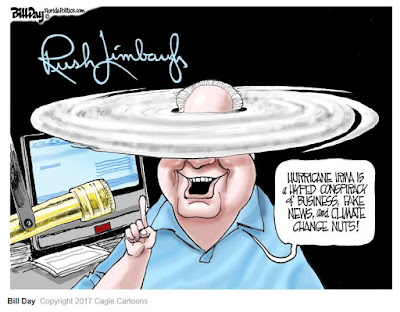 My beloved area is suffering a Category 5 stupidity attack. Does anyone listen to care what this ass says any longer?

Rush Limbaugh (Palm Beach Resident) did evacuate South Florida, just days after the popular conservative radio host claimed that Hurricane Irma would not hit the United States and that scientists and the liberal media were hyping up the hurricane as proof of their global warming “lie.”

Limbaugh said on his show Tuesday.

So there is a desire to advance this climate change agenda, and hurricanes are one of the fastest and best ways to do it. You can accomplish a lot just by creating fear and panic. You don’t need a hurricane to hit anywhere, All you need is to create the fear and panic accompanied by talk that climate change is causing hurricanes to become more frequent and bigger and more dangerous, and you create the panic, and it’s mission accomplished, agenda advanced.

Has he completely lost it? I guess this falls into the 2% of the time he is not correct. Makes you wonder about the 98% correctness he claims, if he could be so wrong and stupid on this. Hard to call this "fake news".