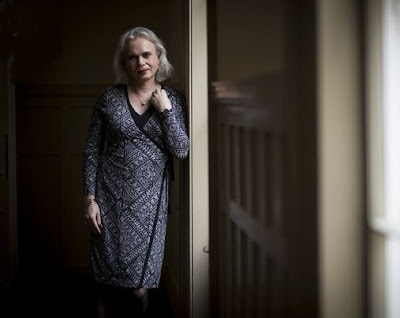 Cross-dresser Dr Ciara Cremin
She Has written a book about her experiences and how is breaking barriers.


Doctor's new book to break down barriers on cross-dressing

Dr Colin Cremin startled his sociology students at Auckland University when he turned up to his lecture in high heels, pantyhose, full makeup and jewellery.

Now two years later, as Ciara Cremin, she is releasing a book to the world to help break down barriers on cross-dressing and gender stereotyping.

The book, Man-Made Woman - The Dialectics of Cross-Dressing, tells how that day - July 27, 2015 - ended a lifetime of repressing his, now her, desire to dress as a woman.

"I'm hoping to break the taboo... on male-to-female cross-dressing," said Cremin, who travels to the United Kingdom next week to promote the book, released today.

Cremin said the book was a frank account of her desire to dress as a woman and the reality of doing so in the workplace and in public.

She said the desire is a common one among men but few are in a position to act on it, except in parody.

"It's extremely rare to see... any male dressed in women's clothes," Cremin said.

"I think that... tells us something about the kind of society we live in, where in this day and age it's still so rare for a man to cross that... kind of invisible boundary. It's not like you'd be arrested for dressing the way I do, but people obviously police their own behavior."

Cremin, 48, tells in her book how when she was a young boy she "dreamt of having my own Bat Cave... I would slide down a pole... and enter a space full of women's clothes, boots, makeup and so forth that I would put on and roam around in freely".

"That's something else I want to also draw attention to," she said. "That it's not that these desires... come somehow later in life, and that you think to yourself, oh it might be nice to wear women's clothes, I wonder what that's like?

"It's that these things happen at a very, very early age."...

Cremin said of 'cross-dressing': "All forms of dress are artifice. We're all cross-dressing in a certain way, it's just that I'm dressing in a way that's inconsistent with how people imagine men should dress."


•Man-Made Woman - The Dialectics of Cross-Dressing, by Ciara Cremin, is published by Pluto Press and available through Amazon.


Read the whole article "Doctor's new book to break down barriers on cross-dressing ",  and watch the video. Thanks Katy for the head-up on this.
Posted by rhonda's escape at 5:00 AM