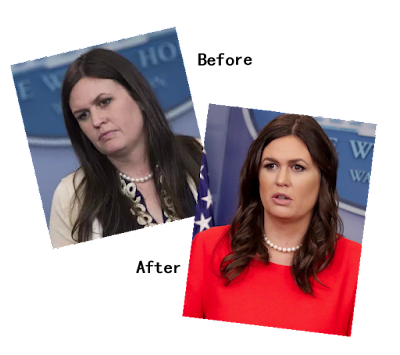 "Man up".  If there any more male shaming words than that?  I have never heard it directly but one day at work I overheard a phone conversation that a female co-worker was having with her husband. That is what she said to him and I can only imagine how me felt.
I have been told when young, "big boys don't cry."; an equally demeaning comment stating you have no right to your emotion at the moment. Even the "you throw like a girl" hurt. Shamed.

I have always wondered what would be the female shaming equivalent. I believe it was stated recently and we have been watching the results play out on a daily basis. In my opinion, Sarah Huckabee Sanders was shamed by one very insensitive comment about her looks.

The former White House communications director, Anthony Scaramucci, shared his thoughts on press briefings and the role he will play in the Trump administration. He also took the time to comment on White House press secretary Sarah Huckabee Sanders’ hair and makeup regiment. This is the shameful backhanded statement:

For Sarah Huckabee, I want to do everything I can to make her better at that podium. I think she’s phenomenal there now. But like every athlete that is training for the Olympics, every day we have to make ourselves incrementally better, The only thing I ask Sarah — Sarah, if you’re watching, I loved the hair and makeup person we had on Friday, so I’d like to continue to use the hair and makeup person.

First, let me say that Sarah Huckabee Sanders has an impossible job. She must present down and being up; north being south and present untruths as they are truth. Like her predecessor Shawn, time will judge her content.

Did Scaramucci just state that she “was not feminine enough” or “She needed to look better on the podium?  Did she need more makeup and a new hairstyle to be "incrementally better"?  So very sad.  Take a look at the before and after photos. Something changed.

Women care more about their appearance because looks are more consequential for them.  The key reason for this is that their appearance is central to how they are evaluated by others (Source psychology today).. When I am out as Rhonda I am insecure about how I look. One long look and I go down my list. “Too much makeup”;  “not enough makeup”.  “Oh no my hair does not look presentable.”  The jewelry is overdone.  What have I done wrong?  A comment like Scaramucci's would be devastating.

There was nothing wrong with the way Sarah Huckabee looked before. Her generation does not wear makeup the way we do. Whenever I see her how, I am reminded of a young girl playing dress-up. Or maybe someone that just had the super full-treatment at a department store cosmetic counter. Natural or less is better for daytime - Be yourself.

The "shame on you" goes to Scaramucci, which might as well have said “Man up”, had Sarah been a man.