The Transgender Day of Remembrance seeks to highlight the losses we face due to anti-transgender bigotry and violence. I am no stranger to the need to fight for our rights, and the right to simply exist is first and foremost. With so many seeking to erase transgender people -- sometimes in the most brutal ways possible -- it is vitally important that those we lose are remembered, and that we continue to fight for justice.

Remembering the transgender people killed in 2017

This is just the USA list (source Wikipedia and QNotes)


Jamie Lee Wounded Arrow, a 28-year-old Native American trans woman was found murdered in her apartment in Sioux Falls, South Dakota on 7 January, however, she is believed to have died at least several days prior.

Sean Ryan Hake, a 23-year-old transgender man was shot three times by police and killed in Sharon, Pennsylvania on January 6. The police were responding to a domestic call for which Hake had threatened their mother and cut his own throat. Hake's family has filed a lawsuit alleging the police violated Hake's civil rights.

Mesha Caldwell, a 41-year-old black trans woman, was found shot to death on a road near Canton, Mississippi on 4 January.

Jojo Striker, a 23-year-old trans woman of color, was found shot to death in a garage in Toledo, Ohio, on 8 February. She suffered one gunshot wound to her chest.

Jaquarrius Holland, an 18-year-old black trans woman, was shot during a verbal altercation in Monroe, Louisiana on 19 February.

Tiara Lashaytheboss Richmond, a 24-year-old black trans woman who was also known as Keke Collier, was shot on Chicago's south side on 23 February, by an unknown assailant while sharing a vehicle with them. She was found by police on the ground outside, and rushed to the hospital, where she died around 7:00 AM.

Chyna Doll Dupree, a black trans woman, also known as Chyna Gibson, was shot in New Orleans on 25 February, by an unknown assailant. She was found by police at 8:30 pm lying in a parking lot outside a shoppingmall. She had been shot several times, and died at the scene. Her aunt described her as "a very loving person [who] didn't do nothing to nobody".

Ciara McElveen, a 26-year-old black trans woman, was stabbed in New Orleans, LA, and left on the side of the road. She was transported to University Medical Center where she died on 27 February.

Alphonza Watson, a 38-year-old black trans woman, was shot in the stomach on 22 March in Baltimore, Maryland. She was transported to Johns Hopkins Hospital where she died. Her mother described Watson as "the sunshine of our family," a "caring, passionate" person who loved cooking and gardening.

Chay Reed, a 28-year-old transgender woman of color, was shot and killed on 21 April in Miami, Florida. Reed’s longtime friend told Mic about their longtime friendship—describing her as someone who was full of life and beloved by many.

Kenneth Bostick, a 59-year-old black trans person identifying as male, was found with severe injuries on a Manhattan sidewalk, and later died of his injuries. Few details about Bostick's life have been reported; he may have been homeless at the time of the attack. Early reports also identified him under his previous name.

Sherrell Faulkner, 46, died on May 16 in Charlotte, N.C. from injuries sustained from an attack in November of 2016. Faulkner was found beside a dumpster, and police are investigating the death as a homicide. “We are asking leaders and community members at every level to consider both the overt and underlying reasons for these killings,” Ames Simmons, Equality North Carolina’s director of transgender policy said. “We must address the root causes of violence against our community, and we cannot rest until the violence stops.” Friends and family also remembered and memorialized her with posts on social media. Police have asked anyone with information to call Crime Stoppers at 704-334-1600 or visit their website, at charlottecrimestoppers.com.

Kenne McFadden, a 27-year old black trans woman, was found in the San Antonio River on 9 April. Police believe she was pushed into the river, which runs through downtown San Antonio. A high-school friend of McFadden described her to local media as assertive, charismatic and lovable. No arrests have been made, but police said they have a person of interest in custody. Due to media misgendering McFadden, her identity as a trans woman was not corrected in news stories until June.

Ally Steinfeld, 17, was murdered in early September, and her remains were discovered on Sept. 21, in Cabool, Mo. Steinfeld’s sister Ashleigh Boswell described her as “a very loving, outgoing person.” Actress Patricia Arquette, who had a transgender sister, Alexis, who passed away last year, was one of the donors to a GoFundMe to cover funeral expenses. “This donation is in honor of Ally,” Arquette wrote. “Who was brave enough to live her truth in a very ignorant world.”

Kendra Marie Adams, a 28-year old trans woman of color, was found in a building that was under construction and had burns on her body on 13 June, in Ithaca, New York. Police have charged Michael Davis, 45, with Adams' murder. Adams also went by Josie Berrios, the name used in initial media reports on her death.

Ava Le’Ray Barrin, a 17-year old trans woman, was shot and killed in Athens, Georgia, on Sunday, 25 June. She was killed by a person she knew after an altercation in a parking lot. She has been remembered as a "social butterfly" and an "amazing girl".

Ebony Morgan, a 28-year-old trans woman of color, was found shot in Lynchburg, Virginia, on Sunday 2 July. After being found shot in a residence, she was transported to a local hospital where she was pronounced dead. The local police report uses her previous name but confirmed that she goes by Ebony.

TeeTee Dangerfield, a 32-year-old transgender woman was found shot multiple times by her vehicle in Atlanta, Georgia, early morning Monday, 31 July. She was taken to the hospital and later died of her injuries.

Gwynevere River Song, 26, was shot and killed in Waxahachie, Texas on Aug. 12 after an altercation with an individual in their home. They identified as “femandrogyne,” as well as bisexual. “I love you so much, you are missed so much I can’t figure out how I’m going to go on,” Song’s mother, Marcy Mosher, wrote on Facebook. “I promise you I will carry out your wishes.”

Kiwi Herring, a 30-year-old transwoman of color was shot by police following an altercation in St. Louis, Missouri on 22 August.

Pepper K, aka Phoenix, a 33-year-old trans person was killed by another inmate while incarcerated in the Mansfield Correctional Institution. Phoenix was taken to an area hospital and died of their injuries on 25 August. They had participated in the Black and Pink LGBTQ prisoner online pen pal program.

Josie Barrios, 28, was discovered deceased at a construction site in Ithaca, N.Y. A can of gasoline was found next to her body, and a man was arrested for her murder, as well as arson. Barrios also went by the names Kendra Adams and Kimbella Rosé. “She would take everything negative thing that people brought about her and every aspect of her personality that could be degraded and blow it back at everyone,” a friend said.

Derricka Banner 26-year-old trans woman of color was shot and killed in Charlotte, North Carolina in the early morning of 12 September.

Scout Schultz 21 year-old non binary intersex student at Georgia Tech was shot and killed by police on September 16th after experiencing a mental break down on campus. Video was taken of Schultz carrying a small pocket knife while yelling "shoot me!" at police while walking towards them. Upon investigation it was revealed they had written three suicide notes in their dorm room.

Candace Towns, 30, was found shot and killed on Oct. 31 in Macon, Georgia. She had been reported missing three days earlier. Her death is being investigated as a homicide. “If I needed anything she would give it to me. She would give me the clothes off her back,” Malaysa Monroe, her best friend remembered. Towns had been the victim of anti-trans violence in the past, having been shot in the ankle in 2009 just blocks from where her body was found. 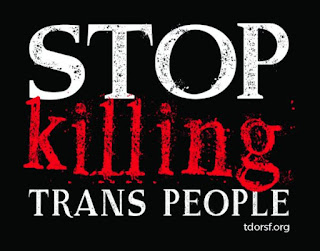