How Low Will The GOP Go?

I have voted Republican more times than I have voted Democratic. Currently I am a registered Independent seeking to not align myself with either self serving party. I vote issues as I believe most thinking person do. If someone/something is a bad candidate or bad policy, irrespective the party affiliation, I do not offer my support or vote. I firmly believe that the majority of Americas are in the middle and only wants what is best or all.  Leadership should always direct us to higher ground.

I voted for Obama both times and have never been more proud to be an American when he was elected. Not because he was a Democratic, but because it represented a maturing of the American population and seeing a candidate as good for America regardless of race. I found the racist backlash shocking and unbecoming.

Trump’s “Drain the Swamp” was appealing at first. One did not need to do deep research to know that he was a man of no morals, shaky business principals and lower intelligence. His MO has not change. America is suffering serious embarrassment on the world front and we have a dangerous man in charge of our military and nuclear arsenal.

The Republican Party as a whole has lost its mind. With no credible leader they move from one hurtful policy to another. Only a few have stepped up and said that the “Emperor has no clothes”.  Even the president’s own Secretary of State does not deny calling the President a moron.

CNN’s Jill Filipovic summed up beautifully the state of the GOP in the editorial article “How low will the GOP go?” 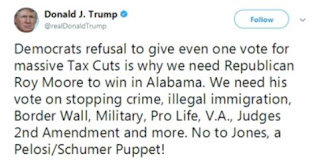 Roy Moore, a religious zealot running for a US Senate seat out of Alabama, has been credibly accused of pursuing and preying on teenage girls when he was in his 30s. One was just 14 years old when, she alleges, Moore -- stripped to his underpants -- touched her intimately and tried to get her to touch his genitals. Moore denies the allegations.
And in one of the more shocking and disgusting moves in a year marked by shocking and disgusting politics, the Republican Party (and Trump) are supporting him.

But Trump is a figurehead, not a king, and Republicans don't have to follow his every whim. Some, including Jeff Flake and John McCain, are refusing to get behind Moore. But the organized party apparatus is now backing him. The party of "family values" and morals, so delicate they think bigoted bakers shouldn't have to make wedding cakes for gay people, are endorsing a man who, by many accounts, would prowl malls and courthouses looking for teens to "date."

This is a broken party. Trump is the largest and most obnoxious symbol of that, but GOP support of Moore shows that this isn't about individual awful men. It's about a toxic institution that has proven itself beyond redemption.


Note for this week: The president has fully endorsed Roy Moore. With a morally corrupt political party and president, let us hope the people of Alabama have the intelligence to do the right thing even if the president cannot. If Moore is elected, Alabama, the Republican Party and this President will be tainted by the stain of Roy Moore for many years to come.

Further note Tuesday evening late: The right thing was done by the people of Alabama.  A wake up call to politicians who think the extreme should be normal.