CN Lester is a writer, musician, academic, and leading LGBTI activist. Co-founder of the UK's first national queer youth organisation, they curate the trans art event Transpose for Barbican, and work internationally as a trans and feminist educator and speaker. Their work has featured on BBC Radio 3, BBC Radio 4, SBS, The Guardian, ABC, The Independent, Newsnight, and at Sydney Opera House. 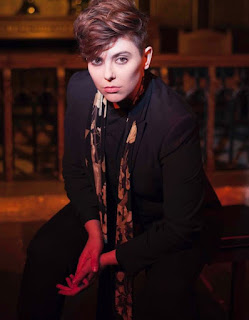 A singer-songwriter and a classical performer, composer and researcher, CN specialises in early and modern music, particularly by women composers. Gigs/engagements include work at The Barbican, Southbank Centre, Snape Maltings, The Royal Exchange, Fluid Festival, Queer Prides throughout Europe, and art galleries/bars/recital halls/book and coffee shops/universities throughout the UK. They have released three independent, crowd-funded albums: "Ashes" (2012), "Aether" (2014) and "Come Home" (2017) - all available via iTunes, Amazon and Spotify.

"Trans Like Me" (Virago/Seal) is their first book, named as one of the three essential works on trans issues by The New York Times. With glowing reviews from The Times Literary Supplement and Publishers Weekly, "Trans Like Me" is a collection of essays on gender, society, history, and building better futures. The book is available on Amazon.

The music is haunting and beautiful!  See CN Lester web site for much more.