Dan Levy was well suited for the event Sunday evening.

“Schitt’$ Creek” just broke an Emmy record for scoring the most wins for a comedy series in its last season.

Last summer while in the Burlington/Toronto area I took a drive north to see the small Canadian town where on-location, outside taping is done - Goodwood ON. The show has literally put Goodwood on the map. Obviously "Schitt$ Creek" is not real and the majority of the show's scenes are done inside at a Toronto sound stage. Still, I felt an affinity with such a cute little town and had to visit. 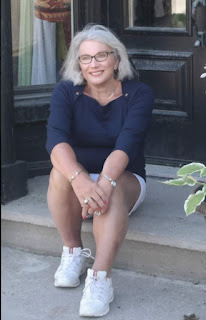 The photo here is taken sitting in the door of what would be shown as "David Rose's Apothecary". The town photos are: the show's "Bob's" Garage, the "Tropical Cafe" and the complete front of "Rose's Apothecary".
See the photos here - Schitt$ Creek - Where Everyone Fits In
Memories abounded as I thought back to my little town in Virginia that had three very similar buildings, no stoplight, and a garage. It was a delightful day. There are not many that can say they had lunch up in "Schitt$ Creek" - with or without a paddle.
Posted by rhonda's escape at 5:00 AM