Schitt$ Creek - Where Everyone Fits In

I discovered the CBC - POP TV "Schitt$ Creek" comedy series  a few  month ago. Now in season 5, it quickly became a guilty pleasure. After the first show ended, I wanted more - yes, a binge-watch in the making.

It is a reverse "Beverly Hillbillies" (wow, am I telling my age), where a crazy rich family loses everything and must move to a small town they previously purchased as a joke. The possible "town interactions" are endless as they live in a broken down motel and start a slow assimilation into the town's life and their new life.


The tiny town, (very much like the one where I was raised) accepts the eclectic Rose family, played by the father Eugene Levi, mother Catherine O'Hara, and son and daughter Daniel Levi / Annie Murphy. The TV production is a family affair with Daniel and Eugene co-producing and Daniel writing. The dialogue is sharp and funny.


Eugene Levy has also won two Emmys for his writing on Second City Television (SCTV) as well as many other awards and nominations for his television work. He is a veteran actor who has appeared in more than 60 motion pictures to date, eight of which having topped the $100M mark. From what I read, he is a true Canadian treasure. This year "Schitt$ Creek" has Emmy nominations for Comedy Series, Lead Actor in a Comedy Series (Eugene Levy), Lead Actress Comedy Series (Catherine O’Hara), and Contemporary Costumes categories.

Dan Levy's activism in the LGBTQ community is written into the the story line. He uses "Schitt$ Creek" to demonstrate a world without homophobia. As he explains to the Advocate:


The amount of response I got from the third season of our show where we first introduced the character of Patrick was like, ‘I really hope nothing bad happens to them.’ It was a very conscious effort on my part to not have that happen. In fact, it’s been a conscious effort to not ever show the other side on our television program. I have made a very strong point to not ever show bigotry, homophobia, or intolerance on our show because to me, it’s a celebration of love. At the root of it, "Schitt$ Creek" is a celebration of love between the family and between the relationships that we build. 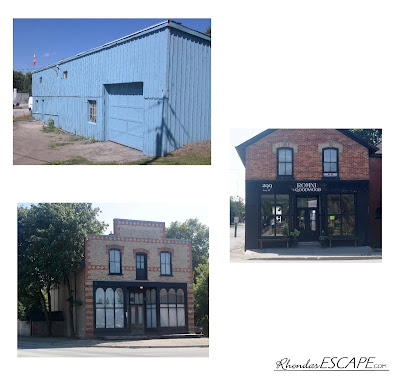 Last month while in the Burlington/Toronto area I took a drive north to see the small Canadian town where on-location, outside taping is done - Goodwood ON. The show has literally put  Goodwood on the map. Obviously "Schitt$ Creek" is not real and the majority of the show's scenes are done inside at a Toronto sound stage. Still, I felt an affinity with such a cute little town and had to visit.

The photo above is taken sitting in the door of what would be shown as "David Rose's Apothecary". The town photos are: the show's "Bob's" Garage, the "Tropical Cafe" and the complete front of "Rose's Apothecary".

Memories abounded as I thought back to my little town in Virginia that had three very similar buildings, no stoplight, and a garage. It was a delightful day. There are not many that can say they had lunch up in "Schitt$ Creek" - with or without a paddle.

In Part 2 I will talk about David's fashion choices.
Stay tuned...