Sara Davis Buechner on Being a Transgender Concert Pianist

The Acclaimed Musician Talks About Piano, Performing In Japan, And How Coming Out Saved Her Life

Concert Recorded on June 19, 2019 in The Greene Space
Part of WQXR's Pride Celebration.

From: Japan Today
By: Kathryn Wortley

TOKYO
As she approaches her sixth decade of playing the piano, Sara Davis Buechner remains as passionate as ever about the instrument she loves. While speaking with Sara in her home in Philadelphia, with a laugh she says she can never retire; music is in her soul and it should be shared.

It’s not surprising to learn that when the critically acclaimed concert pianist is not performing across the globe, she is avidly supporting future generations: teaching budding musicians at Temple University, presenting masterclasses, and judging international piano competitions.


In addition to extensive touring in South America, Europe, and Asia, Sara has performed in every state and province of North America as a chamber musician and soloist for top orchestras, including the New York Philharmonic and San Francisco Symphony. Her technical ability, creative flair, and intuitive genius showcased in her performances has been lauded by the New York Times and Washington Post, and she recently celebrated 30 years as a Yamaha Artist in 2017.

Sara frequently visits Japan to spend time in her Japanese wife’s hometown and to perform for the New Japan Philharmonic, but she is preparing to return to Tokyo this month for one of her most ambitious projects yet: performing all 21 of Wolfgang Amadeus Mozart’s piano concertos with the Tokyo Sinfonia over the course of eight concerts. This is a feat that has never before been attempted by one artist.


I think people have to understand that, for transgender people, feeling at peace with their gender is as essential as eating every day.


As a prominent figure in music and proud transgender woman, Sara also appears at LGBTQ events to speak about her experience transitioning from David to Sara Davis, at age 39. Feeling trapped but obligated to play the part of David, Sara felt herself depressed and suicidal—until she found the strength to become who she was always meant to be.

We caught up with Sara to find out more about her passion for the piano, her musical journey, her upcoming challenge in Japan, and how she feels about her gender transition today. 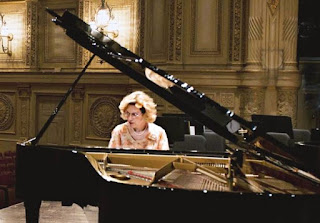