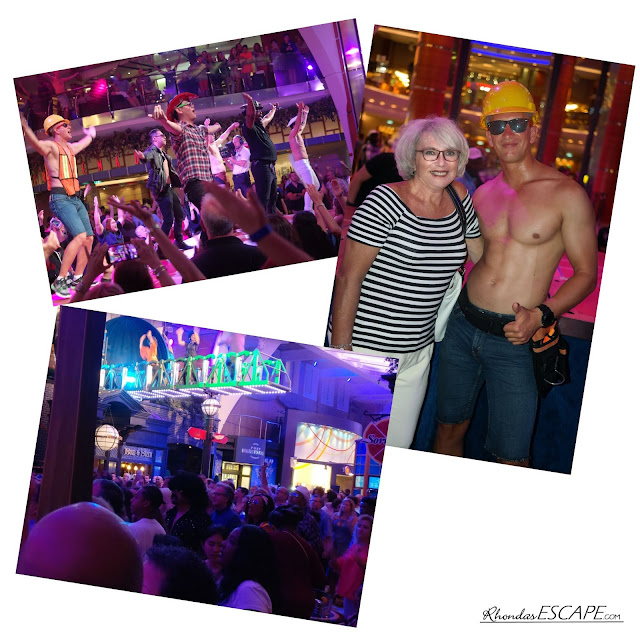 Evenings on board the cruise ship were full and never dull. Dinners were early in the main dining room most evenings, with many choices of what to do next. There was the 1380 seat Amber Theater with the Broadway class production of “Mamma Mia!” There was the Aqua Theater with an incredible water acrobatic show including 60-foot platform high-divers. And in between, there was a piano bar, wine bar, champagne bar, jazz club, dance clubs, comedy clubs, an ice skating show, a karaoke bar and solo music artists performing in the garden of “Central Park”.  And that is not all...

The photos above are from the Promenade Deck where on one of the nights the cruise director hosted a full blown Disco Party. There must have been several thousand being entertained by the beat of “We Will Survive”, "Soul Train", "Kung Fu Fighting", "YMCA" and much more. A very reasonable tribute group of the Village People danced and encourages us all to join in for over an hour. The policeman of the group was none other than the ship’s cruise director. He was quite the entertainer and dance master for the show.

During the cruise he was the hardest working person on the ship. He was everywhere.

The music was great and everyone moved to the beat. Obviously, some knew ahead of time and brought their best 80’s disco outfit. There were many very interesting costumes including one person wearing white Go-Go boots, a paisley polyester 70’s mini-dress, and a long wig. I am sorry I did not get his photo.

Again I want to tell you how easy blending in was on the cruise.  A super wonderful ESCAPE. There are more photos to come and this was just one very full evening of many. Stay tuned.

A broad smile after a full evening of activities.
Do you like the nautical look?