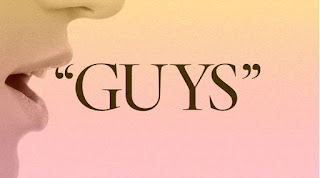 The Problem With ‘Hey Guys’

Several week ago I was out with several friends and what could be an uncomfortable situations landed in my lap. These were male friends that I have know for years and I was in total guy (male) mode; OK, the best I can do at this stage.

Most of the time when out with my female friends, regardless of how I present I get, "ladies how can I help you?"  Typically it is the correct greeting or I just laugh it off with the comment "I have been called worse."  My girlfriends and even family accept me.  No harm; no foul.

As I saw the server coming I cringed - "Gentlemen and lady" would embarrass my friends more than me and the last thing I wanted was to draw more attention to my more-or-less feminine features, hair, stature and androgynous appearance.  As she arrived we got the:

According to The Atlantic, There are, of course, plenty of people—including many women—who have no problem being addressed as “guys,” think the word has evolved to be entirely gender-neutral, and don't see a reason to change their usage. But others aren’t so sure. “I think there's a really serious and welcome reconception of gender lines and relationships between sex and gender going on,” says John McWhorter, who teaches linguistics at Columbia University and has written several books about language. He says “something has crested in particular over about the past 10 years”—something that has people examining their everyday communications.

In my reporting I heard from several people who said that the word is particularly troubling for trans and gender-nonconforming people. “As a transgender woman, I consciously began trying to stop using guys some years ago,” says Brad Ward, a college counselor at a high school in Atherton, California. She added, “When I’m included with a group that is called guys, there’s some pain, since it takes me back to my male days in a way that I’d rather not go.”

The article concludes with this: Even if guys is widely regarded as gender-neutral, there will still be a sizable contingent of conscientious objectors. They argue, not incorrectly, that dropping guys takes very little effort, and any awkwardness that comes with the odd folks or friends or y’all seems far preferable to making a listener feel ignored. (Personally, I’ve come to favor you all, which carries some of the perks of y’all without being tied to any particular region.)