Be Careful What You Wish


The Trump administration may be on the verge of implosion. Strong indicators - This past month’s court cases, movement in the Robert Mueller investigation, anonymous op-eds and multiple friends cutting their loses to avoid long prison terms. According to The New Yorker, Mueller has obtained the indictments of thirty-two individuals and three corporations, as well as five guilty pleas.  All Trump related. Though unnamed, Trump is an "unindicted co-conspirator" in one of the cases.  Not exactly a "witch hunt" as Trump claims.

From the beginning, many have known that the Trump Administration would be problematic, but few of us knew the depth of corruption, incompetence and outright lying that would occur.

Trump in his 2016 convention acceptance speech promised to “protect the LGBTQ community”. Once in office did the exact opposite.

If Trump decides he has endured enough and opts to go quietly, Nixon style (unlikely) or action occurs in the House and Senate, America will still be in jeopardy.

Mike Pence, the heir apparent to Trump, although political savvy, lacks the intelligence to undo the damage perpetrated by Trump. We will get more of the same prejudices; now with religious justifications. 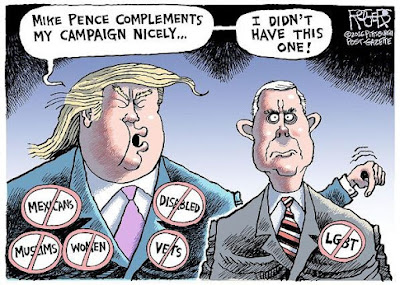 Mike Pence also has a problem with science. Here is one of many examples: In 2000 Pence made an issue of the pending agreement to settle government lawsuits against tobacco companies for lying for decades about the dangers of their addictive products. He stated “Time for a quick reality check. Despite the hysteria from the political class and the media, smoking doesn't kill.”

This was blatantly false based on all scientific evidence. Why you ask would he make such an asinine statement?  Pence's motivation may have been connected to his family's ownership stake in a chain of convenience stores called Tobacco Road, which sold cigarettes alongside soft drinks and chips.  Also, top White House figures – including the vice-president and health secretary – have deep ties to an industry whose donations began pouring in on day one.

According to Richard North Patterson of the Huff Post:  On LGBT rights - As a congressman, he opposed federal funding to treat HIV/AIDS unless the government also funded programs to discourage same-sex relationships. A nasty side effect of his policies in Indiana ― closing Planned Parenthood clinics and stalling needle exchanges. Notoriously, he spearheaded a “religious freedom” law to protect businesses that refuse service to LGBTQ Americans.

What makes him so dangerous? The belief that his seamiest actions and most self-serving calculations are part of God’s plan. Pence is more ready than ever to achieve the dream he believes God wants him to fulfill.

We would be begging for the days of Trump if Pence became president. He’s extreme.