Today's subject deals with a part on my formative years. I was raised in an rural area of Virginia where the primary crop was tobacco. The region's source of financial dependence was derived from this agricultural product. Most farmed it. Others sold seed, fertilizer, or farm equipment, all of which was directly or indirectly tied to tobacco. There were no other cash crops other than moonshine. My grandparents  general store depended on the crops annual success.

Today I bring this up for two reasons. One to highlight private information I had access to in the early 1970's and the other to draw attention to a recent ad campaign belatedly warning of the dangers of smoking.

Also, if you are still a tobacco user maybe this will help you to understand one of the most astonishing systematic corporate deceit of all time. The companies from which you buy product.

According to NPR, "The new tobacco ads are more than a decade in the making. They're the result of a 2006 judicial ruling in a lawsuit filed by the federal government that found that cigarette makers deliberately misled the public about the dangers of smoking. The tobacco companies and anti-smoking advocates fought over every word".

"The tobacco industry got what they wanted by negotiating and stalling all this time knowing the longer they waited the more likely it was that whatever they had to do wasn't going to matter."

Here is a brief history on the lies told by big tobacco CEOs on April 14 1994.

My uncle on my mothers side was an top executive with Philip Morris (PM). Philip Morris license their products to be manufactured around the world and he had responsibility for approximately 1/3 of the worlds production. His mission, seeing that the production by Philippine licensee, La Suerte Cigar and Cigarette Factory conformed to Philip Morris "standards". The man that he replaced in this international assignment moved next into the position of president and CEO at PM.

The PM brands are Marlboro the world’s best-selling cigarette, Virginia Slims, L&M, Lark, Merit, Muratti, Chesterfield and their international brand include Bond Street. Today they boast that the six of the top 15 international brands in the world are theirs.

Most of my uncle's assignments with PM were in Asia and the far east. So much so that he had not lived in the US for almost 30 years. As I was growing up, we were close in a pen-pal way and he did visit home (Virginia) every two years (photo above). Then, I admired what he had accomplished. Being my only relative after my parents and grandparents passed, he still visited and spent time with my family, pre-retirement.


As he was approaching the then mandatory retirement age of 65, I voiced concerns that he would find the US very different. Living back in the US would not provide the amenities he was accustom; a driver, valet, multiple maids, cooks, gardeners and luxury accommodations, all provided by PM.

He assured me that I had no reason to be concerned. Why I asked?  "I know the formula" was his coy answer with no further explanation. And he was correct - he was kept on as a paid consultant (full salary), and continued to have his foreign lifestyle amenities for many additional years.
His comment to me about the "formula" was a full 10 years prior to the tobacco congressional inquiry. Yes, he had full knowledge that the industry was blending (spiking) their product to make it as addictive as possible - "The Formula".

Finally the tobacco companies admit in 2017 what they lied and diabolically addicted multiple generations of the worlds' population to a product that is not only addictive but deadly. All in the name of profit.


According to a CDC - Fast Facts - Smoking & Tobacco Use: Cigarette smoking is responsible for more than 480,000 deaths per year in the United States, including more than 41,000 deaths resulting from secondhand smoke exposure. This is about one in five deaths annually, or 1,300 deaths every day. On average, smokers die 10 years earlier than nonsmokers.

This is part of the campaign - Watch the whole piece

Personal note:  I have never smoked.  My mother died of lung cancer at age 42 when I was 12 years old. A protracted illness followed by a horrific death brought on by many years of smoking. I am an adamant anti-smoking advocate. I hope this encourages you to quit, if you still smoke. Why support a company that has lied to its customers for decades and whose product, when used as intended, causes death.

Live to enjoy your ESCAPES! 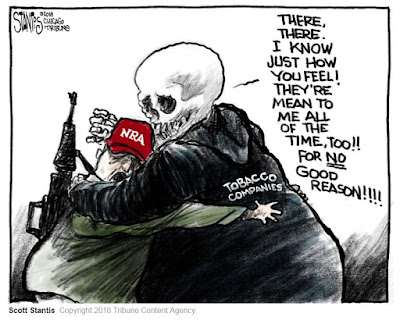 Anyone else seeing a parallel here?
Delivered death in the name of profit!