What Makes You Awesome?

I believe Amy Schumer is one of the brightest women in Hollywood. She has fought against body shaming and has spent years dealing with body image. She is not fat and a recent cover photo in a swimsuit for InStyle proves it. She is not supermodel thin however, represents how real women look. Much more so than how fashion magazines portray women. She is self-confident and speaks her mind.  I like the way she looks.

Hello, I am Rhonda and I am carrying extra pounds. (This is where you say hello back).  I admit it and need to work to get back into stylish clothes hanging in my closet that do not fit. I am not body shaming myself, but know that now is a time to take care of an expanding problem. Swim Suit season? I have never been a diet freak and for most all of my life, I have been blessed with a metabolism that worked for me, not against me. Now is the time to take control back. Too many snacks, breads and deserts.  I will not let this get in the way of my self-confidence. Enough said.

I have known women who go from a size 2 to a size 4, then refuse to leave home; the “I am fat” excuse. This does not play well. People are all sizes and the standard has changed over the years from the curvy figure of the 50’s to the twiggy figure of the 70’s.  No one has the right to shame you, for being you. Some of us will never be a size zero. 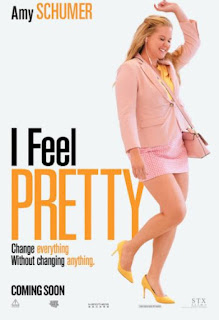 Back to Amy Schumer.  She has just completed a movie due to be released soon that addresses female self-confidence. The title, "I Feel Pretty" and the plot line goes like this:


"An ordinary woman who struggles with feelings of insecurity and inadequacy on a daily basis wakes from a fall believing she is suddenly the most beautiful and capable woman on the planet. With this newfound confidence, she is empowered to live her life fearlessly and flawlessly, but what will happen when she realizes her appearance never changed?"

Critics are judging the premise based on the trailer.  I am going to wait but like the question of “What makes you awesome?”  The Right answer  - A person’s value is not their appearance.

“It’s not a perfect movie,” she (Amy) says of I Feel Pretty, which she also produced. “It would be great if my role had been played by a woman of color and there were more trans people in it, more people with disabilities. But it’s a step in the right direction, I hope.”