Cars in Pairs and Lunch at the Club

The highlight of the day was a tour hosted by Mr. Schumann and his wife.  Several of the car she actually races.   The collection included exotic, rare sports cars and race cars. The cars are displayed in pairs by the manufacturer... one 20th century, the other post-millennial. e.g 2005 C5 Corvette - 1955 Corvette.

There were, Chevys, Fords, Jaguars, Aston Martins, Maseratis, Mercedes, Porches and Ferraris. Mr. Schumann gave a brief overview of each car, took a few questions then ran a high-quality sound program featuring each car as it starts, winds through the gears, down the stretch of his on-site race course and then shuts down. Very cool!!! 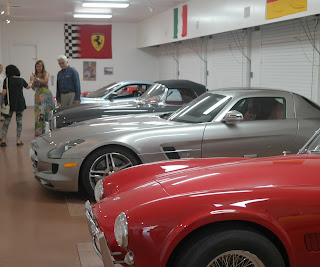 Then it was off to another building for more cars, including a Lola, Shelby A/C Cobra, Ferraris, etc. The most exciting for us was the Gullwing 2014 Mercedes SLS. Also was an open-wheel Ferrari Formula One car from the sixties that actually won the French Grand Prix.

Yes, these cars were also featured in a sound program. After hearing each car’s individual sound, Mr. Schumann plays all the cars together starting and running through the gears. You could close your eyes and picture yourself at the start of Sebring, Daytona or Le Mans.  "Gentleman and ladies - Start your engines!"

After the tour we went to lunch as a group at the Quail Valley River Club in Vero Beach.  The lunch was hosted by one of our members who is a member of the marina and golf club.  Such a fun full day ESCAPE.