Rebekah, a 13-year-old transgender girl, has spent nearly a third of her life living in President Donald Trump’s America, with near-weekly attacks on the LGBTQ community by the administration.
“To be honest, it’s exhausting,” said Rebekah, who lives in Camden County. “Every time I go on social media, I see another attack. And it’s also really scary because I know that at some point this could mean that I can’t be who I am.”
The last four years have been particularly grueling for members of America's lesbian, gay, bisexual, transgender and queer community and their allies.
GLAAD, via its Trump Accountability Project, has reported more than 181 attacks — averaging nearly one a week by mid-October 2020 — on the LGBTQ community, either in actions or in statements, from the Trump administration since the president took office.
Any time an LGBTQ issue comes up, "they take the anti-LGBTQ position," said Diana Flynn, litigation director for Lambda Legal, a national nonprofit organization working for the civil rights of the LGBT community and those living with HIV. "It seems like they are seeking out opportunities to try to undermine the community’s status in the law.”
Rebekah said she was first moved to activism following the Trump administration's February 2017 rollback of Obama-era protections for transgender students that had allowed them to use school restrooms corresponding to their gender identity.
Rebekah said:

It was really upsetting and pretty infuriating. I was 10 years old and it was the beginning of four years of attacks on LGBTQ people.

The diminishment of LGBTQ rights and protections has been felt on many fronts, from the rolling back of protections for transgender patients under the Affordable Care Act, a proposed rule allowing federally funded homeless shelters to deny services to transgender people and largely not enforcing the Supreme Court's June ruling that the Civil Rights Act of 1964 protects LGBTQ people from employment discrimination.

“People need to vote, that’s the gist of it," Rebekah said. "People need to vote for kids like me who can’t vote yet, for so many others and really because my future and my life as the person who I know I am depends on them voting.” 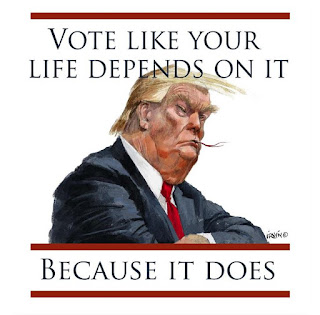