This is a bit of a followup to the oblique question posed to Supreme Court nominee Jackson.  Question: “Can you define the word woman?”  The question was an effort to trap the nominee into undermining gender self-identification. It is my opinion that gender self-identification is a human right. Similar to one declaring oneself to to be democratic/republican, religious/atheistic or declaring one's sexual orientation. 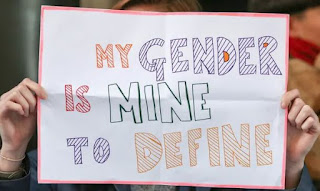 Embracing our individuality is essential for personal happiness. Trying to hide or change who we are to fit someone else’s ideals lessens our sense of self-worth, causing self-esteem to plummet and insecurities to soar.

Gender self-identification is the concept that a person's legal sex or gender should be determined by their gender identity without any medical requirements, such as via statutory declaration.

It is a major goal of the transgender rights movement. Advocates of self-identification say that medical requirements could force trans people into undergoing surgery, are intrusive and humiliating gatekeeping, and that self-identification would make it easier for transgender people to live day-to-day without prejudice. Advocates also argue that there is no evidence that such laws have caused problems in countries where they have been introduced, such as in Ireland, where it was introduced in 2015. Self-identification is opposed by some feminists, who consider safety in places like refuges and prisons, and fairness in sports, to be adversely affected, Opponents also consider affirmation of self-identification in children with gender dysphoria to set them on a path of medical gender transition.

As of January 2022, gender self-identification is part of the law in 17 countries, including Brazil, India, France, Ireland, 6 other countries in the European Union, and several jurisdictions in Latin America. Proposals to introduce it have proved controversial in some countries, such as Spain and the United Kingdom. Within countries organised as federations, such as Canada and Mexico, legal gender recognition may principally fall under sub-national jurisdiction, and so may vary from province to province. Within a single jurisdiction, legal gender recognition procedures can be different for different documents, such as birth certificates or passports, and is not always the sole determinant of gender recognition in day-to-day life, such as in healthcare, access to facilities, or in personal relations.