What Is A Woman?

What was the purpose of that question and how was it meant to trap nominee Jackson and further erode our (transgender) rights? 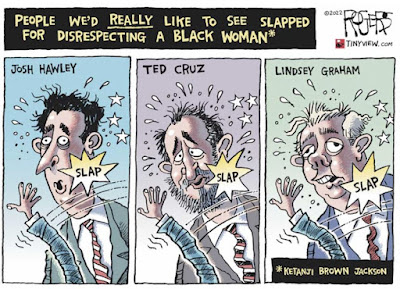 Sen. Marsha Blackburn (R-Tenn.)  question was almost certainly to try to corner Jackson on the issue of transgender women participating in women’s sports ― part of a broader, ugly GOP attack on LGBTQ people heading into the 2022 elections.

Thirteen hours into the first day of Jackson’s hearing last month, the Tennessee Republican tossed out the question: “Can you define the word ‘woman’?”Jackson said, appearing confused:

Can I provide a definition? No, I can’t. I’m not a biologist.”

Read the whole article at huffington post: What's A Woman? GOP Senators Stumble On Their Own Question To Ketanji Brown Jackson.

There is a campaign of exclusion, discrimination and bigotry happening before our eyes.