A 10-year-old transgender girl from Chicago will already be a runway veteran when she takes to the catwalk next month at New York Fashion Week — with plans to walk in Paris next year.

Noella McMaher, whose parents both identify as transgender and who has an infant sibling referred to as a “theybie,” made her debut at NYFW in February as one of several trans and non-binary models walking for the Trans Clothing Company. She was the youngest person to ever take part in the event.

Noella has a lively presence on social media and what seems to be a thriving home life with her parents, Dee McMaher, 35, and Ray McMaher, 32, both of whom were born biological females but now identify as non-binary.

“Noella’s first show was Chicago Fashion Week at 7 years old,” her parent, Dee, told Forbes earlier this year. “An out trans teen told her about open auditions, and she watched YouTube videos to prepare. She booked two designers at her very first audition. Since then she has been in two Chicago Fashion Weeks and a handful of smaller shows.” 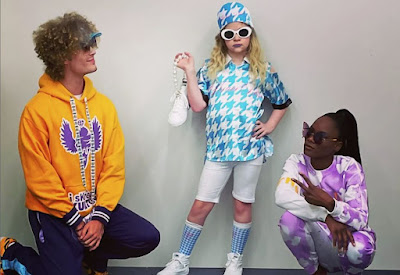 Dee told The Post Wednesday that Noella didn’t like wearing boy clothes even as a toddler and often acted out. Dee said they eventually took her to a gender clinic and she came into her own once she felt freed up to be a girl.

“Our job as parents for all three of our children is to embrace their individual needs,” Dee told The Post. ” With Noella we have a child who has known who she was from very early on.”

Neither of Noella’s parents pushed her to be a girl, Dee said.

“My spouse and I probably own two pairs of shoes between us,” she said. “We’re not into fashion at all. Noella is the opposite. She loves glitter and makeup and clothes. We wouldn’t even know how to encourage that kind of femininity.”