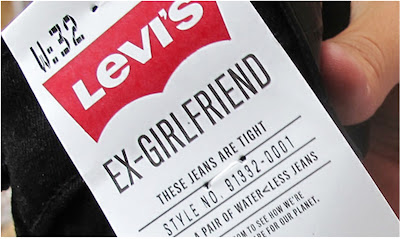 Levi's recently introduced it's new women's-style jeans for men: The Ex-Girlfriend Jean. "Remember the girlfriend with the great style?" the catalog copy reads. "Here's a tribute to her—a fit that's super-snug allover.  But why does the girlfriend have to be an ex?

For women, there are all manner of products marketed as belongings of a current beau: the Boyfriend Sweater, the Boyfriend Jean, and the Boyfriend Shirt. Urban Outfitters alone has 20 items with "Boyfriend" in their names, including this girly pink short-sleeved "Boyfriend" shirt with pearly buttons. In women's fashion, "boyfriend" has become shorthand for anything vaguely menswear-inspired or slightly oversized. And there's a reason those products are marketed as "Boyfriend" rather than "Ex-Boyfriend": marketers think women prefer to be seen as coupled rather than single. There's also that oft-reproduced, "sexy" image of a woman slipping out of a conjugal bed and into her man's wrinkled Oxford shirt. Another possibility: marketers think an oversized shirt won't sell to weight-conscious ladies unless it's labeled as literally belonging to someone else. Imagine the Roommate Sweater. The BFF Jeans - The I-Found-It-On-The-Street Cardigan.

On the other hand, marketers apparently think men won't buy anything women-inspired unless it's associated with a female who is no longer in the picture.  Personally, I've only once seen a boyfriend wearing my clothes (an old pair of jeans) and the image was slightly disturbing, mostly because the jeans looked better on him than they did on me.  It's telling that although I've often borrowed a boyfriend's coat or sweater, I've rarely had them borrow anything off of me. Maybe I'm just a terrible dresser, but it's also just physical reality: they're too big to fit into my clothes. The other part is, most men I've known have been self-conscious about wearing a woman's clothes, even if the clothing was unisex in appearance. Few guys want to be ridiculed for dressing like a girl, or looking like a girl, because (I imagine the thought train goes like) looking girly=being girly. Being girly=possibly liking boys....

Though the Ex-Girlfriend jeans are meant for men, some females are finding them a welcome alternative to women's jeans. One of the commenters wrote: "After trying on countless women's styles, I walked out with these. The rise is perfect, without being high-wasted. The ares which I guess is supposed to be a little more spacious for men leaves just the right amount of space for my curves."

This marketing strategy must not have worked, although "skinny Jeans" are very much the rage today.  But not for my legs.  So if you need the skinny style today, it is to the woman's/Junior section you must go.
Sure - Like we have never been there before?


What was the last item you borrowed from your wife's / girlfriends closet?