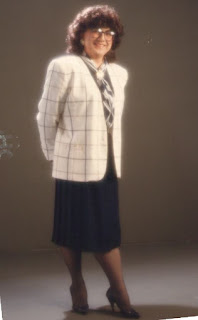 To this day, I still do not know why he did what he did, but I will be ever appreciative to DELTA Airlines for having such a sensitivity employee at that gate, that evening.  More than once I have asked myself, "Did this really happened?"  Yes, and in this case, fact is probably better than fiction could ever be.

After I had slowly spelled my male name he stopped everything he was doing, looked me straight in the eyes and said without hesitation said , "Follow me".  We walked to the Jet Way, and he told the flight attendant standing and taking tickets, "She is OK.  I have her ticket and her boarding pass."  He then walked me half the distance down to the plane, smiled, put his hand on my shoulder and told me, "Take any of the remaining seats.  You will be fine."

"Thank you!" did not seem like enough.  But it was the only thing I could think of to say.

Two others got on and we were on our way to LA.  When we arrived all of the San Diego passengers were put on a bus for a two hour ride to what was our final destination.  We were only nine hours late and by then I am sure that I looked a mess.  My pristine female image from only yesterday I am sure had de-evolved.

On the bus next to me was a very nice young mother who had a six-month-old baby.  I could see the hours and the delays had both taken their toll on mother and baby.  I asked if she would like for me to hold the baby and at that point I think she would have given it to me raise.  The baby fell sound asleep in my arms and I too went to sleep shortly thereafter.  We all woke up just as the bus was pulling into the San Diego Airport Terminal.

I was very pleased to see my checked bags knowing that it was my connection back to a male appearance.  When I got to my apartment, the makeup came off and I had to admit to myself that it did feel good to be back to the reality and safety of the male world.  I had just enough time to make coffee and get dressed for work.  This time the cloths would not be a dress.

The excitement of what I had done was with me all the next day.  At work, everyone asked about my weekend and trip back.  My response; "The weekend as great, but the trip back with all the delays was an adventure."

All of us need to have the courage to venture out and safely live our lives without self-imposed limits and fears.  There is a fable that describes this much better than I can.

There was a man locked deep in a dungeon for half his lifetime.  He finally decided to free himself or be killed in the process.  He made plans to jump his jailer when he brought his food the next day.  While laying out his plans he turned the handle of his cell door only to find it was not locked.

Upon making this discovery he fled the unguarded prison, returned to his home and lived happily ever after.

The message is that we all tend to lock ourselves up with exaggerated anxiety.  If we do not have the courage to try the door, we will remain forever in our own personal prisons. That is why this BLOG is called "Rhonda's Escape".

I hope you have enjoyed all four parts.   Sorry it was so long.  Please comment.